Gurkhas scale cliff to clear rubbish for The Queen

With a biting wind blowing of the sea, soldiers from the 2nd Battalion The Royal Gurkha Rifles (2 RGR) based in Sir John Moore Barracks in Folkestone on Friday 26 February joined forces with the local community to fight Folkestone’s litter. The soldiers shared their military skills to scale the Leas Cliff and fight the blight of hard to reach rubbish on the escarpment.

This special ‘Clean for The Queen’ event involved the troop’s climbing down into the undergrowth from the Road of Remembrance, in celebration of Her Majesty’s 90th birthday celebrations. A (Amboor) Company, collected over 100 large refuse bags of litter over a couple of hours, which included office furniture, umbrellas, several traffic cones and a traffic barrier.

Corporal Pralon Kulung Rai, 28, of A Company 2RGR said: “We work very closely with the local community in Folkestone being stationed in Sir John Moore Barracks. The support and respect we get from them is tremendous, so I am really pleased to be able to give something back to the local community by being part of the ‘Clean for The Queen’ event in Folkestone on this Her Majesty’s 90th Birthday year.” 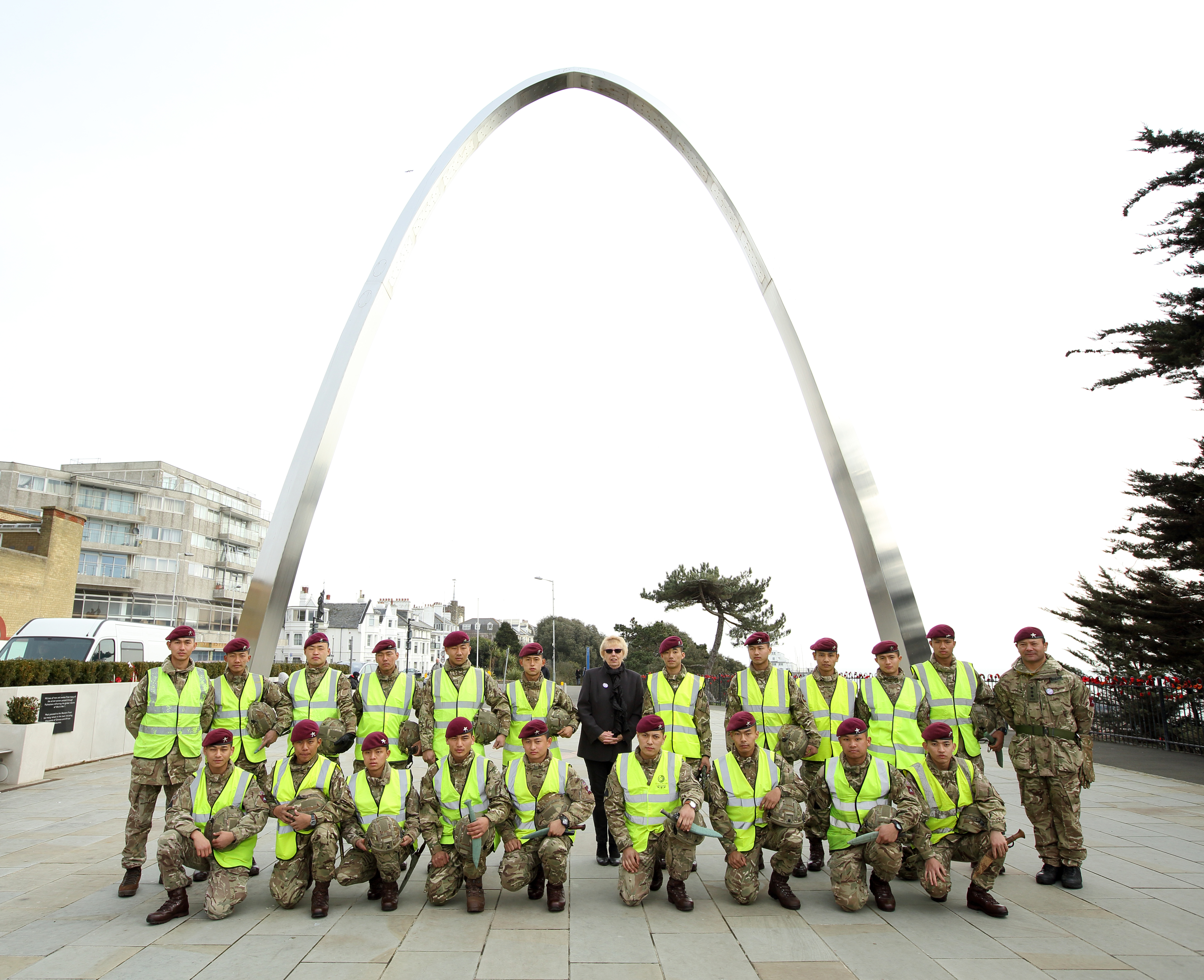 In the shadow of the Step Short Memorial Arch, Folkestone’s tribute to a previous generation of soldiers, it is humbling to remember that the 2nd Battalion will shortly be serving their county in Afghanistan.

Community is very important to Gurkha soldiers. Their time and effort today goes a short way to showing our appreciation to the people and council of Shepway District. The support and welcome that are offered to our soldiers and families is valued by every one of us.

As we look to send many of our troops to Afghanistan again, the community support to our families becomes even more important. The contribution of local schools, businesses and council services all play a vital role in ensuring families are well looked after, and our soldiers are in the best possible mind for deployment.

I look forward to seeing the results of the ‘Clean for The Queen’ campaign this year and wish to pass on my sincerest thanks to all in the local community for their continued support.”

Since the Gurkha regiment moved to Sir John Moore Barracks in 2001 the Nepalese community has taken an active part in town life; the Folkestone Nepalese Community are regular litter pickers throughout the year, supported by equipment from Shepway District Council’s Community Store.

Cllr Jenny Hollingsbee, Shepway District Council’s Armed Forces Champion, said: “Picking up other people’s litter is a small thing compared to military service but both shows the Royal Gurkha Rifles’ commitment to our community. I’d like to say a big thank you to our extraordinary litter pickers today and wish them a safe return from defending our security in Afghanistan.

“Due to this area’s long connection with the armed forces our community is particularly aware of the great sacrifice that the military make for us. We recognise and support this special relationship through our community covenant, an agreement of mutual support between the council, serving and retired service personnel, their families and the local community.”

Cllr Stuart Peall, Cabinet Member for the Environment said: “It takes one thoughtless moment to drop a piece of litter but you can see it gets into difficult to reach places and takes planning and resources to remove. My enormous thanks to the Gurkhas for taking on this challenging task but I’d like to remind everyone that we can help by not dropping litter in the first place.”