The Brigade of Gurkhas wishes everyone a Happy Nepalese New Year 2073!

Here’s a short clip showing some of what the Nepalese Year 2072 entailed for the Brigade of Gurkhas:

Here’s a small history behind the Nepali Calendar (Bikram Samwat) which became the official calendar of Nepal in it’s 1958th year.

Bikram Sambat is the calendar established by Indian emperor Vikramaditya and is recognized as the official calendar of Nepal. In addition to Bikram Samwat, the Gregorian calendar is also widely accepted in the Nepali community. The Nepali Calendar is a solar calendar based on ancient Hindu traditions. The history of Nepali calendar has an intriguing story.

It’s said that this calendar derives its name from king Bikramaditya of Rajasthan,the then an independent country in the Indian sub continent. But after the rise of the Rana oligarchs in Nepal, Bikram Sambat was discontinued for a long time along with the official Shaka Sambat. They discontinued Shaka Sambat in its 1823rd year but later replaced it with Bikram Sambat for functionary use since then; Bikram Sambat came into official use in 1958 as Nepali calendar.

The significance of the Nepali calendar has different aspects the more important one being that the Nepalese people use more than one calendar and celebrate their new year days accordingly. Nepal has a unique lunar calendar by its own name, called Nepal Sambat. Almost all festivals rituals are observed according to this calendar. This calendar originated in Nepal and bears strict resemblance to Nepalese culture and tradition. The different months in the Nepali calendar are named accordingly as beginning with Baisakh and ending with Chait.

There are many events in the Nepali calendar with each month having a special religious ritual assigned to it, the most important being the festival of Mata Tirtha Puja, Buddha Jayanti and Dashain. Thus, the Nepali Calendar presents an accurate measuring of different religious celebrations of the Nepalese. The festivals for Nepali Calendar 2073 are published below: 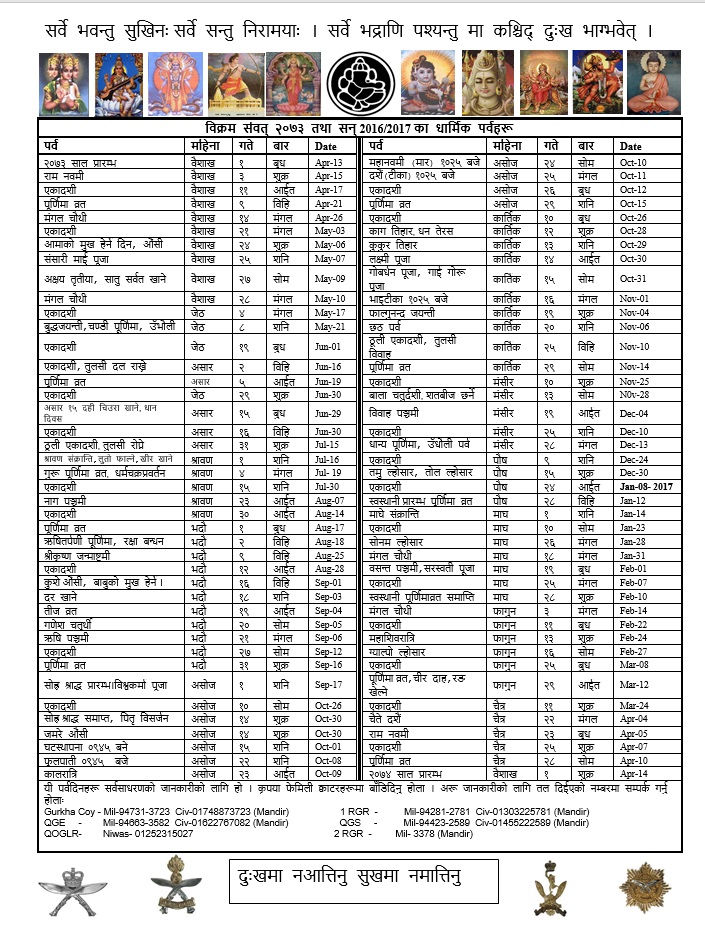