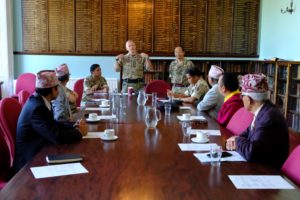 The meeting was opened by Colonel Brigade of Gurkhas, Colonel JG Robinson, and was chaired by Deputy Chief of Staff, Major Surya Rai.

All Hindu and Buddhist Religious Leaders as well as available Gurkha Majors attended the meeting.

The agenda points included, among other things, the option of the BG’s inclusion in the wider Armed Forces faith networks, namely Hindu and Buddhist; BG’s religious and cultural calendar; best practice sharing; and Religious Leaders outputs.