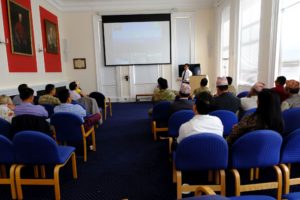 The event which was organised for the first time aimed exclusively at those in charge of delivering G1 welfare and transition within the Brigade of Gurkhas units, consisted of comprehensive briefs by subject matter experts in various fields including transition, immigration, housing, personnel recovery and welfare funding.

The forum commenced with an opening address by Colonel Brigade of Gurkhas, Colonel JG Robinson and concluded with a presentation on Gurkha Welfare Advice Centre Aldershot and its outputs, and was attended by unit Gurkha Majors, Welfare Officers, Welfare staff as well as Gurkha Religious Leaders.