On 6th September 2018 Mr Allan Derham (77 years old) presented to the Brigade of Gurkhas a model of he has built of the battleship HMS Gurkha,which was built and sunk during World War Two. The model is over one metre in length and a 1:96 scale model. It took him a pain staking 15 months to construct. 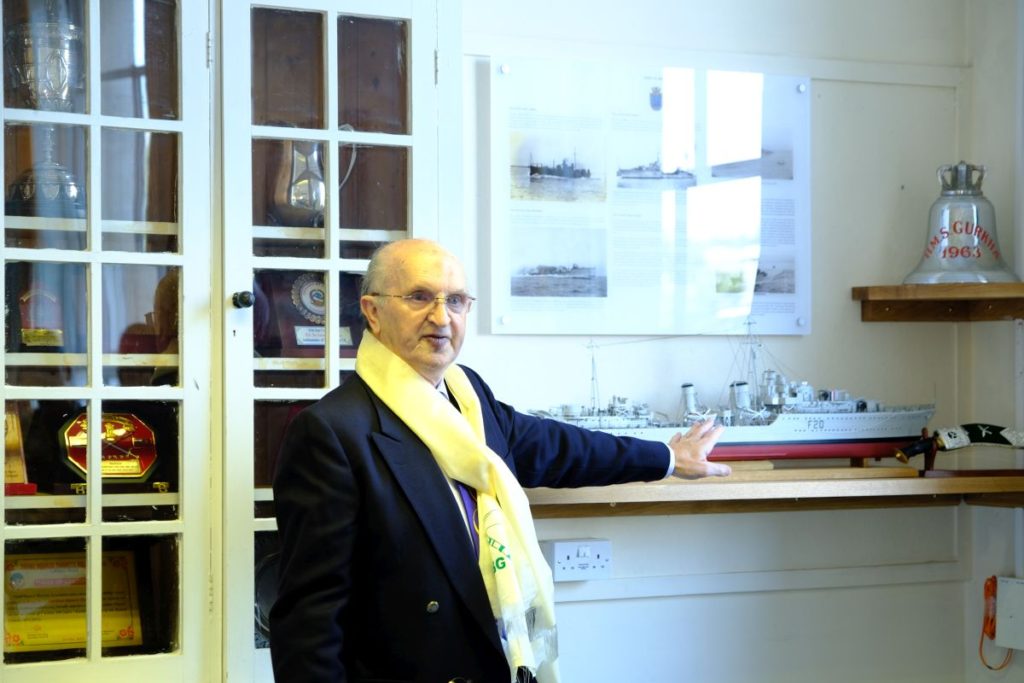 Mr Derham is a retired aircraft engineer having worked for BAE Systems for most of his working career. He is one of the best model makers in the UK and he undertakes these builds purely as a hobby. He is a member of the ‘Surface Warship Association‘. He was also a Sea Cadet from the age of 12 and stayed a member for 20 years and was commissioned during his service.

The model will displayed in the Headquarters Brigade of Gurkhas.

The history of ships called Gurkha

The first HMS GURKHA was built at Paisley, Scotland in 1888 and was one of the seven first-class torpedo boats ordered by the Indian Government. Torpedo Boat 101, as she was known, was dispatched to India in 1889 for service in the Indian Harbour Flotilla. She was named ‘GURKHA’ by the Indian Authorities but later reverted to her original designation ‘TB 101’. The vessel served in the Local Defence Flotilla at Portsmouth during the First World War (1914-1918) and was finally sold for breaking up in 1920. 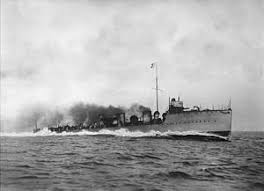 The second GHURKHA (the different spelling was intentional) was a Torpedo Boat Destroyer, built on the Tyne and launched on 20th April 1907. In 1924 GHURKHA joined the Dover Patrol, where she was strenuously employed in escorting troopships and VIPs from Dover and Folkestone to Boulogne in France.

During this time, she was engaged in attacks on submarines and took part in the famous ‘Evans of the Broke’ action with German destroyers. Early in 1915 she fought an action with the submarine U8 causing it to surrender. On 8 February 1917, waiting to escort a troopship, she ran into a small unmown minefield about three miles off Folkestone and sank. All but twelve of her crew of 95 were lost. 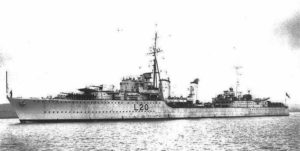 The third GURKHAone of the famous Tribal class destroyers, was built in Glasgow and completed on 21st October 1938. At the outbreak of the Second World War she was serving in the 4th Destroyer Flotilla, Mediterranean Fleet, but was later transferred to the Home Fleet. On 23th February 1940 she destroyed the German submarine U53 by depth charges west of the Orkney Islands.

When the German Fleet was reported at sea on the 7th April 1940 on what proved to be the invasion of Norway, GURKHA was among the ships which left Rosyth to endeavour to intercept them. On the afternoon of the 9th April, when off Bors Fjord, Norway, in an attack by German aircraft, GURKHA was so badly damaged by six near misses that she subsequently sank. Most of her crew of 190 were saved by the Cruiser AURORA, but five officers and ten ratings were lost. 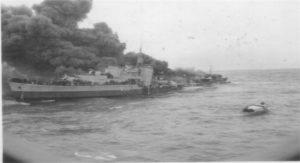 The fourth GURKHA was a destroyer of the LAFOREY class laid down in 1938 and was to have been named LARNE. On the loss of the third GURKHA, the Gurkha Brigade offered to pay for a new ship. In gratitude, the Prime Minister, Mr Winston Churchill, ordered that a destroyer to be launched should be named GURKHA. The launching ceremony was performed by his daughter Mary, and the ship was completed on 18th February 1941.

After working up at Scapa, at the end of July 1941 GURKHA formed part of the anti-submarine escort of the Middle East troop convoy to Suez. On 29th August she was ordered to join the escort of convoy OC71 which had suffered severe losses and on arrival at Gibraltar, she came under the orders of the Flag Officer Force H, as a unit of the 4th Destroyer Flotilla.

Early in the morning of the 30th September 1941, while acting as anti-submarine screen to Force H, she destroyed the Italian submarine ADUA East of Cartanga. Later in the year GURKHA escorted NELSON home for repair after she had been torpedoed in a Malta convoy whilst giving passage to the ARK ROYAL survivors. A very sudden storm caused all the escort but GURKHA to leave NELSON. GURKHA was badly damaged but having been repaired at Plymouth, she arrived back in Gibraltar on 13th December 1941.

On 26th December, she left Malta escorting convoy ME8. She was dive-bombed leaving the Grand Harbour, her Pom Pom guns claiming a JU88, and she arrived at Alexandra on 29th December. On 16th January, she left Alexandra escorting convoy ME88 and during the night she took the astern position. At first light while proceeding at 25 knots to take up a new station she was hit by two torpedoes and the aft magazine blew up. For a time she was surrounded by burning oil but was towed clear by the Dutch Destroyer ISAAC SWEERS, thus saving the greater part of the GURKHA’s crew. 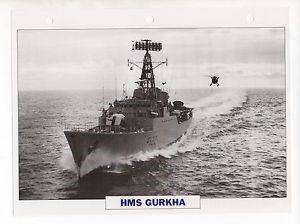 The fifth HMS GURKHA was launched by Lady Carrington (wife of the then First Lord of the Admiralty) on 11th July 1960. After service in the Persian Gulf and West Indies, she completed an extensive two years refit at Rosyth in 1978 which provided her with the most modern weapons and equipment. Among the tasks for which she was equipped were anti-submarine operations, anti-aircraft defence of merchant shipping and naval forces, aircraft and helicopter gun fire support and peacekeeping duties ashore. She was decommissioned in 1980 and placed initially in the Standby Squadron, but in 1981 was placed on the Disposal List awaiting sale to Venezuela.

During the Falkland’s Conflict in 1982 it was decided to re-commission her for active service with the Fleet. Once the decision was taken, officers and ratings were extracted from various other units and ships to form the ship’s company. The ship was ready for recommissioning in seven weeks. The Recommissioning Parade took place on 24 Jul 1982 at Rosyth Dockyard. The Inspecting Officer was Rear Admiral J C Warsop who took the salute and inspected the parade commanded by the Commanding Officer, Commander P D Stone Royal Navy. The Commissioning Warrant was read by Commander Stone followed by a dedication and hymns were sung by all present. The recommissioning culminated with a reception on board during which the Commissioning Cake was cut by Mrs Mary Stone (wife of Commander Stone) and Junior Seaman Stone (the youngest rating on board) assisted by Captain (QGO) Rambahadur Limbu VC 10GR. HMS GURKHA was very actively employed during this final commission, seeing service in the West Indies, USA, Gibraltar and UK waters.

The fifth GURKHA was finally decommissioned on 30 March 1984 at Portsmouth Dockyard. Aptly, the guest of honour at the ceremony was Lady Carrington, who had launched the ship in 1960. Equally aptly, Rear Admiral J C Warsop, now Flag Officer Portsmouth inspected a parade of the Ship’s Company on the quayside, and Captain (QGO) Rambahadur Limbu VC 10GR was also present. The ship was sold to Indonesia and the Ship’s Bell and other memorabilia are held in trust by the Brigade of Gurkhas.