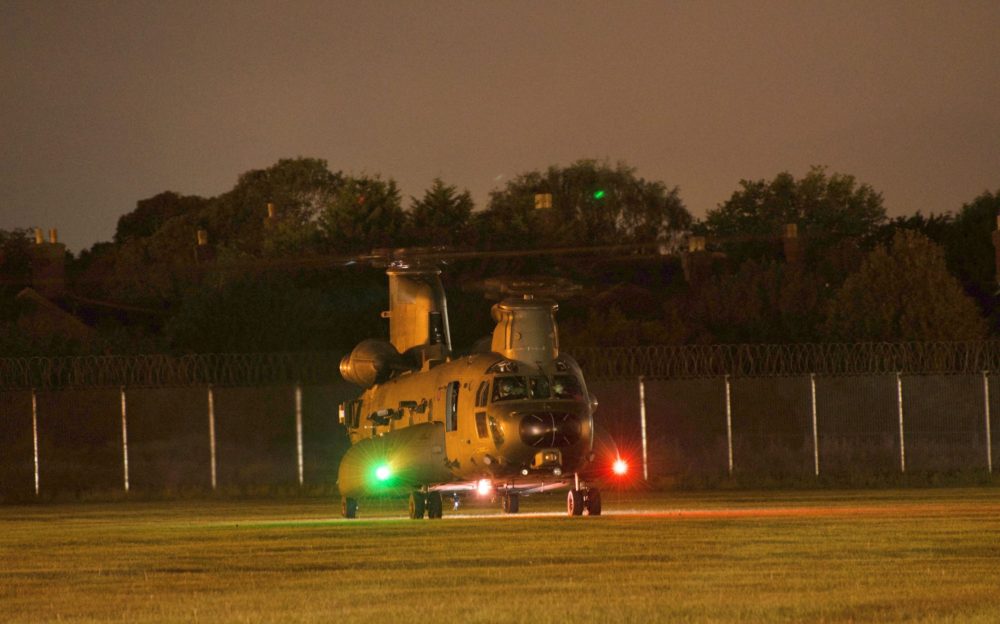 During the Battalion’s time as the Air Manoeuvre Battlegroup, we have deployed on various local and overseas exercises including to France and Croatia where we were taught how to operate at Brigade level with our NATO allies. As specialist Air Assault and Air Manoeuvre troops we must be able to perform Tactical Air Landing Operations, Rapid Air Landing Operations and complex Air Assaults by day and by night. We also have a high chance of being deployed around the world for NEO and HADR operations.

As lockdown has eased, our training has gradually increased and 11th June 2020, two sections, including myself, were selected by 4 Platoon Commander (PC) Captain Cosmo Cavell Saheb who is working on developing new drills to form new Air Assault Doctrine. Basically, we would be landing, by night, from a CH-47 Chinook within ambush range of 30m on a hot landing zone and assaulting straight towards the target. The day of the event we gathered at  the football pitch and were given an overview about what are we going to, how we were going to do it, and what things we are to be aware of while performing the drills. We dry practiced for 3hrs and we were all set to go that night but due to bad weather the CH-47 couldn’t make it and our drill showcase was postponed.

On 18th June 2020, we were informed the drill would be going ahead that night so we all started preparing our kit. B Company Officer Commanding, the Second in Command, and Company Sergeant Major were there as to observe the training.

One section was kept as fire support group, known as an isolation group in Air Assault, and at approximately 0100hrs the CH-47 arrived at the pick-up zone on the North side of the football pitches on camp. After 10 minutes in the holding pattern in the sky, it began the run in and landed on South East of football pitch 30m from the objective, under the cover of the isolation group. Our planned assault on the objective then took place, with us forming the V-Stack formation and covering our arcs with our IR laser systems. We searched and scanned the objective, each claiming an aperture which is then your responsibility to cover. The target was two vehicles and, and once we had cleared through the objective and conducted sensitive site exploitation, we cracked green cyalumes to inform the FSG they were cleared for regroup and then formed 360 degree arcs while we waited for exfil. Soon after we extracted from the new pick-up zone off the cleared objective.

This training was really useful to the team, delivered in a safe manner. We need to be more aware and proactive whilst performing the drills as it is highly likely to happen in future Air Assault operations. For me as an individual, I learned new weapon holding positions, such as the high-port, and new principles, including steady and accurate movement under NVG’s rather than rapid and inaccurate, as when operating at such short distances from the enemy, we cannot afford to miss our target.