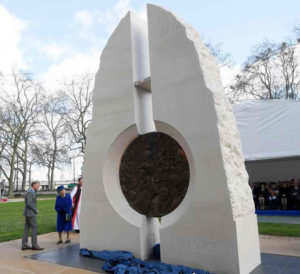 On the 9th March 2017 The Queen was joined by over 2,000 people for the dedication of the new Memorial, which recognises the contributions of the UK Armed Forces and all UK citizens who deployed in the Gulf region, Iraq and Afghanistan from 1990-2015, and supported them back home.

A Service of Dedication was conducted on Horse Guards Parade with The Queen, Prime Minister Theresa May and the Defence Secretary, Sir Michael Fallon, in attendance. They were joined by Their Royal Highnesses The Duke of Edinburgh, the Duke and Duchess of Cambridge, Prince Henry of Wales and other Senior Members of the Royal Family. 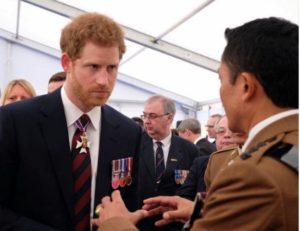 Prince Harry catches up with a Gurkha Officer he served with.

Members of the Brigade of Gurkhas were amongst those present at the event. Many Gurkha soldiers and Officers have served in the region and next week 2 Royal Gurkha Rifles will receive their Operation TORAL medals in Buckingham Palace to be presented by HRH the Prince of Wales. (Operation TORAL is the codename for British presence within Afghanistan post 2014 as part of NATO’s Resolute Support Mission).

The Memorial was formerly unveiled at a short ceremony in Victoria Embankment Gardens, in front of the Ministry of Defence where Her Majesty The Queen met a small number of civilian and military guests – who contributed to the Iraq and Afghanistan conflicts, and Memorial Trustees.

Designed by sculptor Paul Day, the Iraq and Afghanistan Memorial is positioned nearby monuments to the Second World War and the Korean War.

The new Memorial features two large stones – one representing Iraq and the other Afghanistan – linked by a giant, two-sided bronze tondo depicting the Memorial’s theme of “Duty and Service”. The Memorial gives equal prominence to military and civilian contributions, including, amongst others, the delivery of healthcare and humanitarian work. It is specifically intended to be inclusive of all those who contributed and therefore bears no names. 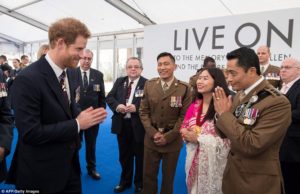 Between 1990 and 2015, thousands of British citizens put themselves in harm’s way, protected our nation’s interests, helped those in danger and worked to improve the lives of those in other countries. Civilians from a vast breadth of organisations worked for more than two decades in areas such as aid distribution, education, healthcare and governance to help the citizens of both Iraq and Afghanistan. Today’s guests were representatives of the many groups, military and civilian,  including current Service personnel, veterans, Civil Servants and aid workers, whose efforts are marked by the Memorial.

The idea of creating a national Memorial commemorating the UK’s military operations and reconstruction efforts, from the liberation of Kuwait in 1990 through to the end of combat operations in Afghanistan, originated in spring 2014 and was supported by the Government. A board of Trustees, whose Chairman is former Chief of the Defence Staff, Lord Stirrup, ran the project, which has Government backing and financial support from LIBOR funding and Sun readers. The unveiling was organised by the Ministry of Defence, on the Trustees’ behalf, in partnership with The Royal British Legion, which hosted a reception after the service.