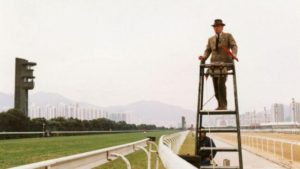 When Ian Tedford left Malaya during the Emergency he was officially a dead man — a “fact” confirmed by an almanac stating that he had been murdered by bandits. It was true that had been ambushed by communist guerrillas and had been burnt alive. But miraculously he had survived.

On that day in summer 1952 Tedford, a 23-year-old Cameronians officer, had just returned from a ten-day jungle patrol. He then headed off, with the assistant manager of the rubber estate where his men were based, to a town 120 miles south. As they returned that night Malay police warned them that communication lines were down, a sign of a potential ambush. Deciding to take the risk, Tedford and his companion pressed on, aware that the area was a killing ground of 7 Independent Platoon, led by a notorious jungle fighter.

Tearing along they suddenly spotted a log across the road. Then came a hail of machinegun and rifle fire. His companion leapt from the skidding car and ran. Tedford was hit in the thigh and collapsed. Found by the rebels he played dead, his blue eyes wide open and staring blankly. Even with a gun cocked at his temple he did not flinch. Deciding that he was already dead, the terrorists stripped him, an indignity that he endured in silent agony.

Meanwhile, the crashed car was turned into a fire bomb, complete with petrol-soaked fuse. “I hardly realised what the next horror was to be,” he recalled. “I was carried roughly to the car, thrown on to the road and kicked under the petrol tank. If I had been lucky five minutes before there was no play-act escape now. I was going to be burnt alive. I wished they had shot me . . .”

From under the car he watched the group light the makeshift fuse and run. “With my last strength I rolled from beneath the petrol tank and as I scrambled into the softly sheltering lalang the searing heat blasted from the exploding car, knocking the wind from me and singeing my hair.”

After crawling to safety he found his blood-soaked companion, who had been caught and bayoneted front and back, and tried to shelter him from the blazing car. It was still burning when the Malayan police arrived and opened fire, bullets screaming over their heads. When the firing stopped Tedford lurched into the road and yelled in English. The pair were rescued and taken to hospital, Tedford having fashioned a tourniquet around his own thigh. Several weeks later a communist courier was killed and found with documents detailing the pair’s identity and stating their deaths at the hands of the rebels.

It was only the following year, as he headed home on a troopship, that Tedford heard of his demise when a fellow passenger showed him the almanac: “On the page where he jabbed his finger I read that . . . I had died on the night of the 7th of July, 1952,” he wrote. “Evidently I was living on borrowed time.”

John Galbraith Tedford, always known as Ian, was born in Glasgow and raised in Irvine and on Arran. He was educated at Glasgow Academy and gained a place at university to read chemistry before National Service intervened. In 1947 he joined the Royal Scots Fusiliers, later transferring to 1st Battalion the Cameronians (Scottish Rifles), commanding his platoon during the Malayan Emergency.

After his brush with death Tedford spent a spell at home before being deployed back to Malaya and seconded to the Gurkhas. He transferred permanently to 7th Gurkha Rifles in the mid-1950s, where he served as company commander, intelligence officer and battalion second in command. He resigned from the army in 1974 with the honorary rank of lieutenant-colonel and began a second career, based on his passion for horses, with the Royal Hong Kong Jockey Club (RHKJC).

By this time he was divorced from his first wife Gillian, the mother of his sons, Alastair, an investment manager, and Nicholas, an architect. His second wife was Lindy Tedford (née Tibbatts), with whom he had Joanna, a graphic designer and photographer, and Alexandra, known as Sandy, a casting director.

Tedford worked with the RHKJC for more than a decade as official starter, his military background having prepared him well for the tense atmosphere of the starting gate. He earned the respect of many top jockeys, including Lester Piggott and Willie Carson.

He returned to Scotland in 1986, managing Luffness New Golf Club on the East Lothian coast, where his stewardship was defined by his organisational skills and no-nonsense attitude.

When, 65 years after hoodwinking those rebels in Malaya, Tedford faced odds he could not beat, he dealt with terminal cancer in similarly stoic mode — briskly issuing orders for his funeral and taking betting advice from Carson on this year’s Derby. It ran on June 3, his 88th birthday. Tedford died the day before, having picked the winner, the aptly named Wings of Eagles.