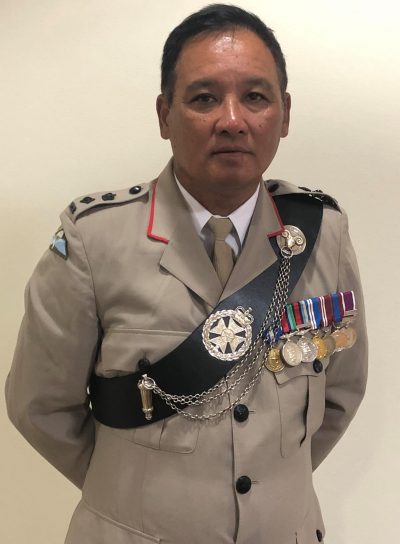 Lieutenant Colonel Rajeshkumar Gurung enlisted into the Brigade of Gurkhas in 1990 in Pokhara, Nepal, as a Combat Clerk. On completion of basic training, he joined The Second Battalion, Second King Edward’s Own Gurkha Rifles in Brunei. Following Options for Change and the merger of Gurkha units, he volunteered to be re-roled as General Duty Infantry in 1994.

As a Senior Non-Commission Officer, he has held the appointments of Platoon Sergeant, Assistant Intelligent Officer and was the first Gurkha to pass Special Duties selection and served with the unit between 2005-2007. On promotion to Warrant Officer, he was appointed to the position of Warrant Officer Instructor the Brigade Training Team.

Lieutenant Colonel Rajesh commissioned in June 2008 and was appointed as the first Gurkha Battlegroup Intelligence Officer. He then took over the appointment of Regimental Signals Officer and deployed on Operation HERRICK 12. On completion of this tour, he took over the appointment of The First Battalion, The Royal Gurkha Rifles (1 RGR) Quartermaster Technical and deployed on Operation HERRICK 16/17 as Camp Bastion Quartermaster Technical in Acting Major rank. On completion of Operation tour, he was appointed Second in Command Gurkha Company Catterick in 2014 and was promoted the same year and took over the command of Support Company 1 RGR in Brunei. He was the first Gurkha Late Entry officer to have been selected to attend the Intermediate Command and Staff Course (Land) at Joint Services Command and Staff College Shrivenham and on completion he was appointed to Staff Officer Level Two Training Plans in Command and Staff Tactical Training Group. He commanded the biggest recruit intake of 432 recruits and 104 permanent staff as Officer Commanding Gurkha Company Catterick. He was appointed as the Gurkha Major in July 2021, a firm believer in Gurkha kaida. Lieutenant Colonel Rajesh was delighted to have been appointed as the Deputy Commander British Gurkhas Nepal and looks forward to serving both the United Kingdom and Nepal with enthusiasm.

During his career he has served in Hong Kong, New-Zealand, Canada, Belize, France, Germany, Brunei, Kenya and New Caledonia. He has completed numerous operational tours including Kosovo, Bosnia, Sierra Leone, Ivory Coast and Afghanistan (three tours). He received the CBF Commendation during Operation AGRICOLA in Kosovo for his valuable service and was further awarded The Prince of Wales Khukuri for outstanding service and broadening the name of the Brigade of Gurkhas.