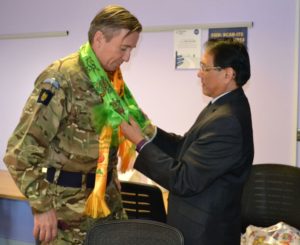 General Bashall being welcomed at GWAC

On Tuesday 29th November 2016 the Gurkha Welfare Advice Centre (GWAC) in Aldershot was visited by Commander Home Command, Lieutenant General James Bashall CBE. Prior to the visit he was briefed in his office by Colonel Brigade of Gurkhas, Colonel James Robinson, on the history of Gurkha Settlement. On arrival he was met and hosted by Captain (Retd) Mahendra Limbu ex-Queen’s Gurkha Signals, Honorary Lieutenant (QGO) Tulbahadur Gurung ex-Royal Gurkha Rifles both from HQ Brigade of Gurkhas, and Captain (Retd), Gary Ghale, ex-6 Gurkha Rifles, from the Gurkha Welfare Trust. He also met the Director Gurkha Welfare Trust, Mr Al Howard.

General Bashall was briefed on the formation of the GWAC in 2009 and its role in supporting Gurkha veterans arriving in UK requiring assistance with National Insurance numbers, state benefits and housing. He was informed of the 55,000 visits that the team have received and the time-consuming process of registering on-line on behalf of the new arrivals. He also heard of the GWAC Outreach surgeries which are delivered to other locations requiring assistance such as Reading, Swindon, Ashford and Wembley as well as the additional support provided by the other GWAC in Salisbury which provides advice and assistance to ex-Gurkhas across the UK.

General Bashall took time to meet staff, volunteers and clients including Mr Minbahadur Sherchan who had previously held the world record for climbing Everest at the age of 77! Living in Aldershot, General Bashall was interested to learn of the progress on integration in Aldershot and elsewhere as well as the role of Gurkha communities across UK to assist their fellow countrymen with settling in the UK. 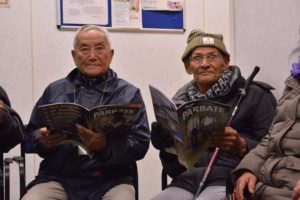 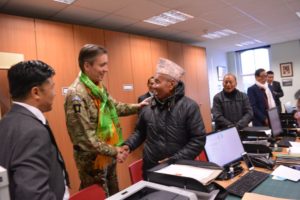