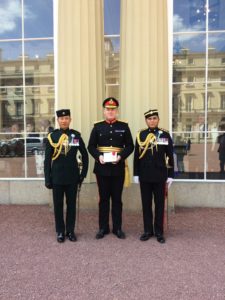 Major General Angus Fay, Assistant Chief of Defence Staff (Logistics Operations) and Colonel of the Regiment Queen’s Own Logistic Regiment, who was awarded a Most Honourable Order of the Bath (CB) in the New Year’s Honours List of 2018 for services to Defence, yesterday received his award at an Investiture at Buckingham Palace conducted by Colonel in Chief of the Royal Logistics Corps and Queen’s Own Gurkha Logistic Regiment, Her Royal Highness The Princess Royal.

On duty at the Palace for this Investiture in their role as Queen’s Gurkha Orderly Officers were Captain Dillikumar Rai, Royal Gurkha Rifles and, in a happy co-incidence, Captain Ganesh Tamang from Queen’s Own Gurkha Logistic Regiment.