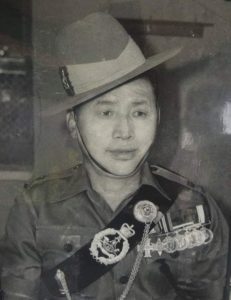 Major Indrajit Limbu,  has died aged 93. He was born on the 25th December 1925, died March 25 2019 He had a distinguished career with the Gurkhas and won an MC in Borneo during the “Confrontation” with Indonesia.

The Confrontation began in 1963. Indrajit, in command of a platoon of the 1st Bn 10th Princess Mary’s Own Gurkha Rifles (1/10 GR), was among the first in his battalion to make contact with the Indonesians who crossed into Sabah in North Borneo at Kalabakan early the following year.

Indrajit’s platoon, numbering 16 men, had been tracking 10 Indonesian border terrorists for four days through thick jungle. There was minimum visibility and silent movement was almost impossible. On January 7, at first light, he and his men picked up the trail of the terrorists again and set about driving them towards a cordon of riflemen who were lying in ambush.  After three hours, hearing firing from the ambush position in front of him, he and his riflemen moved quickly to that area. There they came under heavy fire from the terrorists, who had taken up a defensive position on a hill and set up a machine-gun post.  Realising that any delay would enable the enemy to escape under cover of the thick foliage, Indrajit led his men in an attack. The intensity and accuracy of the enemy fire was such that two riflemen were killed almost at once and the rest were forced to take cover.

Indrajit gave orders to continue the attack in a series of short coordinated charges, taking their timing from him. Such was the speed and determination of the assault that the terrorists were pinned down and unable to get away. All 10 of them were killed. The citation for the award to Indrajit of an MC stated that he had shown supreme qualities of leadership and indomitable courage.

Indrajit Phago Wanem Limbu was born on Christmas Day 1925 in a hill village in Panchthar District, eastern Nepal. In 1943 he left home, and after six months as a junior soldier in Boy Service he enlisted in the Indian Army in March 1944 and took part in the last phase of the Burma Campaign.

At Partition in 1947, he transferred to the British Army and joined 1/10 GR as a rifleman. He served in Malaya from 1948 to 1960 during the “Emergency” and earned an excellent Mention in Despatches as a platoon sergeant. In 1961 he was commissioned as a Queen’s Gurkha Officer and served in four six-month tours in Borneo from 1962 to 1966.  Eighteen months after the action for which he was awarded the MC, Indrajit and his men took a leading part in an ambush of a large, diesel-engined boat in the border area near Bokah, Sarawak. As the boat, carrying about 30 terrorists, drew opposite his position, Indrajit directed the fire of his machine-gunner while coming under heavy small-arms and mortar fire from the opposite bank. Of the enemy on the boat, only two survived.

He was appointed MBE in 1976. The recommendation for the award stated that he was the epitome of what a Gurkha Major should be, a respected ambassador for the Gurkhas, a wise counsellor and mentor to his CO and a successful blend of leader, guide, disciplinarian and Father Superior to the 1,000 Gurkha servicemen and their families that he was responsible for.  He was a natural leader. Men obeyed him and followed him by instinct. They were attracted to him by his exuberance, his zest for life and determination that any situation, however dire, would never get the better of him. One of several colourful nicknames that he acquired was “The Smiling Assassin”.

In 1977, Indrajit retired from the Army as Honorary Captain after 33 years’ service and settled in Dharan, East Nepal. He was chairman of the Nepal Branch of 10th GR Regimental Association and president of its Dharan Branch.