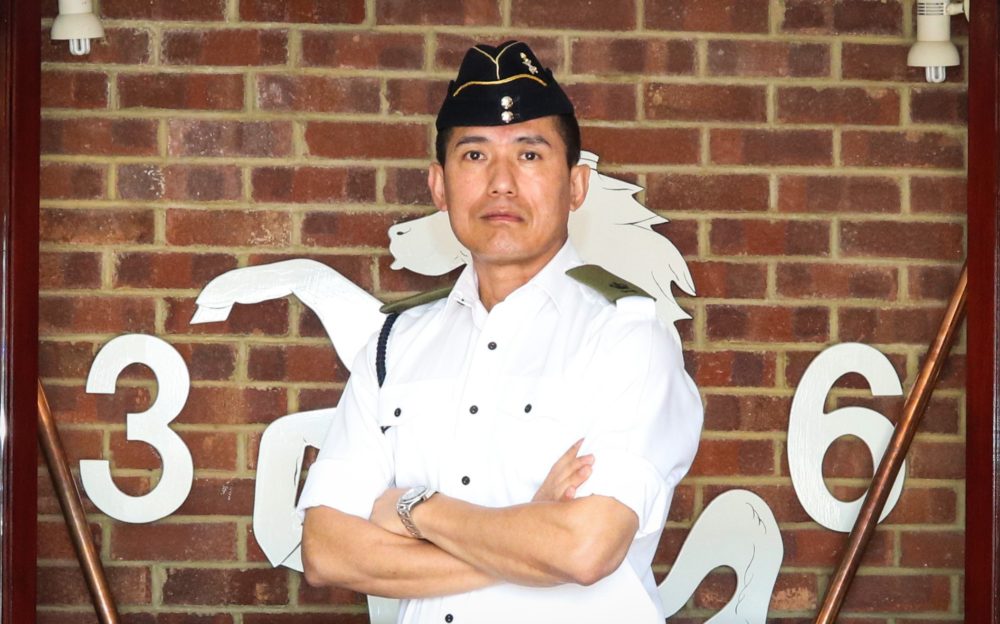 He was commissioned in 2010 and Command within 36 Engr Regt where he planned, managed and deployed on myriad of regimental exercises and construction projects including JFEE exercise in Kenya.  He then deployed on Op HERRICK 16 with 26 Engineer Regiment as Officer Commanding Engineers as a part of Brigade Advisory Group.

This saw him advise Officer Commanding Afghan Engineer and develop Afghan Engineer Squadron. Thereafter, he was assigned to Infantry Training Centre Catterick as a Platoon Commander followed by Training Officer and was responsible for planning and execution of phase 1 training for 240 recruits. He was then assigned to 36 Engineer Regiment as a Gurkha RCMO in April 2015. This saw him lead QGE growth; he planned and oversaw Phase 1, 2 & 3 growth. Additionally, he conducted staff work for QGE growth opportunity including QGE structural review. Subsequently, he was assigned to 24 Commando Royal Engineers (RE) as a Training Major and Quartermaster in May 2017. This saw him plan, manage and run Commando training and Squadron training.

Simultaneously, he was employed as the Queen’s Gurkha Orderly Officer from July 2018 to July 2019 within Buckingham Palace where he was responsible for escorting Her Majesty The Queen and members of the Royal family during investitures. He was awarded Member of the Royal Victorian Order (MVO) in July 2019. Thereafter, he was employed as a Senior Instructor Combat within REWW.

Major Khapung started his soldier career in May 1991. On completion of basic combat infantry training at Training Depot Brigade of Gurkhas in Hong Kong, he was awarded Champion Potential Technician Recruit and Overall Champion Recruit and joined the Queen’s Gurkha Engineers. On arrival at the unit, he completed Combat Engineer class 3 course and was awarded Overall Top Student and deployed to South Korea as a part of UN peacekeeping force. Subsequently, he was awarded Top Student during the Junior Leaders’ Cadre and was promoted to Lance Corporal. He then completed AA Drill Instructor Course (Gurkha) followed by Combat Engineer class 1 course and was awarded Top Student. Thereafter, he deployed to Bosnia followed by Cyprus as an electrician and was promoted to Corporal.  Later, he deployed to Falklands Island as a RE Boat Section Commander and assisted Navy vessels.

He completed JNCO instructor course and achieved Top Combat Engineer Instructor and Overall Top Student, and was awarded the ‘HAYNES Medal’, as a result he was selected to be employed as an instructor within the Instructors Troop, 3 RSME. He then completed the All Arms Drill Instructor Course at Pirbright and was awarded Top Student. He was later promoted to Sergeant and deployed on Op TELIC 1 where he was responsible for conducting real time route recce. As a Staff Sergeant he deployed on Op TELIC 4 and revitalized irrigation within Basra. He was then assigned to 3 RSME where he completed QMSI course and was awarded Top Student. As a direct result, he was selected to be employed within REWW as a QMSI RE Troop Commander Course. Prior to being employed within REWW, he was employed as QMSI 36 Engineer Regiment and deployed on Op HERRICK 7 as a reconstruction & development Warrant Officer. He scored joint top during LE CAB and was given the option to commission within the Royal Engineers.