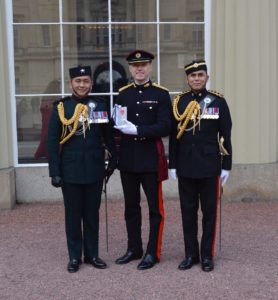 Major Mark Hendry received his MBE from HRH The Prince of Wales at Buckingham Palace on Friday 27th January 2017.

Major Mark Hendry finished his tour as OC 69 Sqn Queen’s Gurkha Engineers about a year ago.

In year 2015 he deployed with the squadron to the Falkland Islands to conduct infrastructure repairs in poor conditions.

On hearing the news of the earthquake in Nepal, the squadron were immediately redeployed to Nepal to support the post earthquake reconstruction.

Having sent out reconnaissance patrols, his teams provided emergency support to those most in need before they began the hard work of reconstruction in the most demanding conditions.