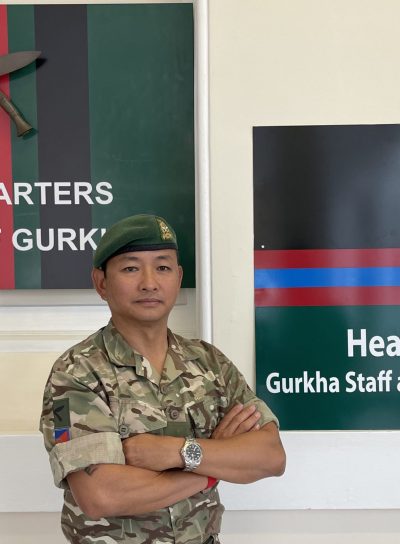 Major Narendra Kumar Gurung Gurkha Staff and Personnel Support (GSPS) (Naren) was commissioned from the ranks into The Royal Gurkha Rifles in April 2009 having enlisted into Brigade of Gurkhas in 1989. On commissioning, he was assigned to DM(A) as the Staff Officer Level Three Gurkha Manpower and Transfers managing the bulge created by changes in Gurkha terms and conditions changes. He subsequently served at regimental duty with the 1st Battalion The Yorkshire Regiment in Germany as their SPS Field Detachment Commander during Operation HERRICK 15 tour, until August 2012. He established and assumed the Regimental Administration Officer appointment of 1st Military Working Dog Regiment (RAO 1 MWD) in Sennelager in November 2012. Early into his RAO tour, he took on the mantle of the Adjutant 1 MWD Regiment with Squadrons continually deploying on Operation HERRICK roulements. He was awarded the Certificate of Meritorious Service in 2014 by the General Officer Commanding (GOC) Force Troops Command for his efforts.

Major Narendra completed his regimental duty as the RAO 1 MWD Regiment in summer 2015 after seeing through the Regiment rebasing from Germany to the UK under Operation BORONA. He fulfilled the role of a Chief Instructor Learning Development Wing at Support Battalion Infantry Training Centre Catterick from November 2015 until assuming the Deputy Chief of Staff Headquarters Brigade of Gurkhas (HQBG) alongside the Officer Commanding GSPS appointment in July 2017 until July 2019. Major Narendra deployed to Afghanistan on Operation TORAL in September 2019 as the Theatre J1 Staff Officer where he experienced the COVID-19 surge in Theatre and its impact on operations. On returning to the UK in April 2020, he boarded repatriation be-spoke RAF flight to Nepal on assignment as the Deputy Chief of Staff British Gurkhas Nepal in July 2020, a challenging but fulfilling assignment. Major Narendra returns to HQBG/Regimental Headquarters GSPS as the Officer Commanding/Staff Officer Level Two GSPS and hopes to contribute to the betterment of the Brigade of Gurkhas and the GSPS.

Major Narendra enjoys playing competitive Golf and has a growing interest in cyclo-cross. He considers himself retired from active sports and enjoys his spare time binge reading.