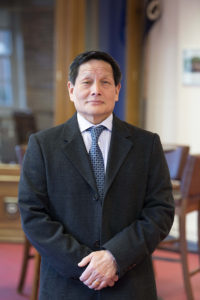 Congratulations to Major (Retired) Santa Pun who was awarded the MBE in the New Year Honours list.

He enlisted into the Army in November 1974 and trained as a Telecommunication Technician after joining The Queen’s Gurkha Signals.  Promoted through the ranks and commissioned in January 1992.

He retired from regular  service in November 2001 and worked as SO2 Plans and Programmes in the Army Junior Division until 2004.  Since then he has been working in the Army Division, Defence Academy UK as SO2 Course Coordinator.

He joined the Army Reserves in 2008 and served in Royal Corps of Signals in various Staff Officer Appointments in the rank of Major and retired in 2017.

During his regular Army career, he held the following appointments:

“A meticulous worker and utterly reliable, he continues to uphold the very highest standards of the Gurkhas. He has a gravitas and authority well beyond his military rank, frequently attends meetings in which he is the most junior representative, yet invariably punches above his weight.”