Bhadrapur, July 21: The normal life in the districts of Terai region is affected today due to a general shutdown called by some dissenting political parties to the draft of the new constitution.

In Jhapa, vehicles have remained off the road. The vehicles of both long and short routes to and from the district are not plying after the strike.

The Federal Socialist Forum Nepal, Terai-Madhes Loktantrik Party, Sadbhawana Party and Tarai-Madhes Sadbhawana Party called the general shutdown across the Terai claiming that police used excessive force to control the peaceful agitations in Terai districts on Monday during the public hearings held to collect feedback on the preliminary draft of ‘Nepal Constitution, 2072’.

In Biratnagar, normal life has been affected due to the strike called all of a sudden from early this morning. Hundreds of passengers have been stranded as the vehicles could not leave go to their destinations.

Kathmandu, July 21: A five-day National Table Tennis Championship has kicked off at Lainchaur, Kathmandu from today.

The competition, organized with an objective to raise fund for the quake-hit table tennis players in the national squad, will see 11 different events at the National Table Tennis Training Centre in Lainchaur, shared Dharmaman Bajracharya, Chairperson of the ANTTA.

Victims of earthquake get ID cards 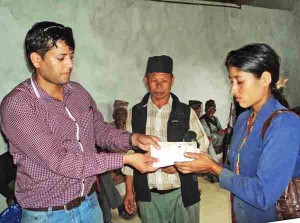 Diktel Municipality officer Narayan Dhakal handing over ID card to an earthquake victim along with
relief amount to build shelter at a programme organised in the municipality office, in Khotang, on Sunday. Photo: THT

Distribution of identity cards for earthquake victims began in Khotang on sunday.

As many as 111 tremor victims at ward no 10, 11, and 12 of Diktel Municipality received the ID cards along with immediate relief fund for construction of temporary settlements.

Narayan Dhakal, executive officer of Diktel Municipality, said they had distributed ID cards and relief fund to victims whose houses were completely destroyed in the April 25 earthquake and subsequent aftershocks.

According to a municipality source, the ID cards and relief fund were distributed to victims under Temporary House Construction Programme.

Indira Thapa of Diktel said that she would build a temporary house with the relief amount. “We have been living under makeshift tents. The fund will help us build temporary shelters,” she said.

A total of Rs 1.66 million relief amount will be distributed to as many as 452 houses of the municipality.  The municipality said that a monitoring team would be deployed to inspect if the victims build temporary houses with the fund.