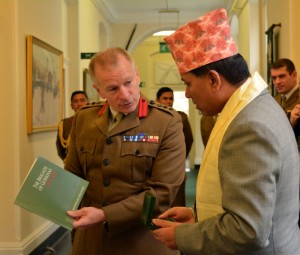 On the 21st November 2016 the Ambassador of Nepal to the United Kingdom visited the Headquarters Brigade of Gurkhas at Robertson House.

The Ambassador (Dr. Durga Bahadur Subedi) was greeted at the main door by the Colonel Brigade of Gurkhas (Colonel James Robinson) and Deputy Chief of Staff (Major Suryakumar Rai).

He was then invited into the building and greeted in the customary manner with a traditional Khada, he was invited to to sign the visitors book and was presented with gifts including; A book ‘The Gurkhas 200 years of Service to the Crown’ (signed by the author Major General J C Lawrence CBE), a brochure all about the anniversary of 200 years service to the Crown and a Headquarters Brigade of Gurkhas presentation coin.

The Ambassador was then given a brief on the Brigade of Gurkhas, Gurkha Terms and Conditions of Service and the Gurkha Welfare Trust.

Prior to lunch the Ambassador was escorted to the temple next to Gurkha Company Sittang within the grounds of the Royal Military Academy Sandhurst where he met Gurkha religious leaders and this was followed by a lunch by all HQ and Sittang staff.

The Ambassador pays a visit to GWAC

In the afternoon the Ambassador visited the Gurkha Welfare Advice Centre in Aldershot, where the Brigade Welfare Officer (Captain (Retd) Mahendra Limbu) and the Gurkha Welfare Officer (Captain Gary Ghale) showed him around and explained the very important work they conduct in assisting Ex Gurkhas in the community. The Gurkha Welfare Advice Centres (GWAC) in Salisbury and Aldershot have helped thousands of retired Gurkhas to successfully settle in the UK. Our teams work closely with government bodies and service charities such as SSAFA, the RBL and the ABF, who are committed to supporting Army veterans.

Managed by retired Gurkha officers, the two offices are ideally placed to impart advice and help tailored to the elderly ex-Gurkhas and widows coming to settle in the UK, who might otherwise lack the necessary language skills to access the welfare state.  Whether it be for accessing living expense grants or eligible state benefits, seeking employment or simply general advice on life in the UK, the GWACs play a vital role to help those in need.