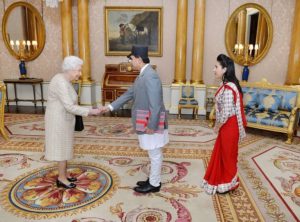 On Thursday 1st December 2016 His Excellency Dr Durga Bahadur Subedi presented his Letters of Credence to Her Majesty Queen Elizabeth II at a special ceremony in Buckingham Palace. He was accompanied by his wife, Mrs Poonam R. Subedi.

Ambassador Dr Subedi conveyed his best wishes and greetings from Rt Hon Ms Bidya Devi Bhandari, President of Nepal for the personal health and happiness of Her Majesty. He extended this to the continued peace and prosperity of the people of the United Kingdom.

Her Majesty wished the Ambassador every success in strengthening the bilateral ties between the two countries.

His Excellency and his entourage returned to the Nepalese Embassy in coach and horses and were accompanied by Alistair Harrison CMG CVO, Marshall of the Diplomatic Corps.

They were welcomed by other ambassadors and selected guests, including Colonel Brigade of Gurkhas and members of the Britain-Nepal Society.

At the reception speeches were made and a toast was given to the bilateral relationship.