Captain Jiwan Prasad Gurung, as a second-generation Gurkha, grew up in Hong Kong and Brunei before moving to Nepal. He enlisted into the Brigade of Gurkhas in 1998 and joined The First Battalion, The Royal Gurkha Rifles (1 RGR) on completion of his initial training.

Captain Jiwan’s formative elements of his career were within 1 RGR deploying to Kosovo and Bosnia. He was awarded the Champion Recruit of Intake 1998 and came top of the Junior Leadership Cadre. As a Corporal, he joined MOD A Block in 2005, deploying on three Operational tours to Baghdad. Following this, he returned to 1 RGR and deployed to Operation HERRICK 17 before completing the Royal Military Academy Sandhurst (RMAS) instructor cadre in 2013 and was selected to be the first ever RGR Colour Sergeant instructor. During his years as a Senior Non-Commissioned Officer, he was awarded the Prince of Wales Kukri on two occasions. On return to the Battalion in 2015, he was assigned to B Company as the Company Sergeant Major followed by Regimental Quartermaster before Commissioning into A Company as a Platoon Commander in 2018. As a Platoon Commander, he deployed to Operation ELGIN and subsequently led a mountaineering expedition to Nepal with soldiers from 1 RGR. He was later awarded the RGR SLIM award.

Most recently, Captain Jiwan has been the Company Second in Command of G Company, 4 RANGER, previously known as A Company, The Third Battalion, The Royal Gurkha Rifles since January 2020. He had the privilege to shape the character of the RGR contingent within the Rangers and Army Special Operations Brigade since inception and has always strived to ensure the core values of Gurkha ‘Kaida’ were rooted in the success.

Captain Jiwan is deeply honoured to be appointed as the next Queen’s Gurkha Orderly Officer; the role that characterises loyalty, principles and ‘Kaida’ of the Gurkhas’ proud tradition. He will be the sole representation of the RGR to Her Majesty the Queen and the Royal Household.

Captain Jiwan is married to Sajani and has two children, Jimal and Shreya. He is a keen outdoor person and loves mountaineering and long distance running with an aspiration to beat his father’s (ex 2n Gurkha Rifles) tally of 15 marathons. 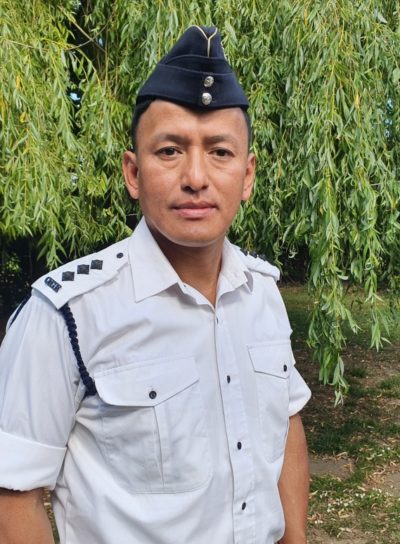 Captain Narendradhoj Gurung grew up in the western region of Nepal and yearning for greater opportunities, he enlisted into the Brigade of Gurkhas in January 1995 in Pokhara, Nepal. After completing recruit training in Church Crookham, he was posted to The Queen’s Gurkha Engineers and completed the Basic Combat Engineering B3 Course at 3 Royal School of Military Engineering (RSME) in Minley before he was posted to 69 Gurkha Field Squadron.

Since being posted to The Queen’s Gurkha Engineers, he served as a physical training instructor at Infantry Training School in Brecon and Combat Engineer Instructor at 3 RSME. He then served as a Gurkha liaison Officer in 1 RSME, Chatham.

Following a successful Royal Engineers Late Entry Commissioning Board, Captain Narendradhoj Gurung was commissioned into the Queen’s Gurkha Engineers in 2017. He then completed numerous assignments including serving as a platoon commander in Catterick, a squadron operational officer in 36 Engineer Regiment and the training officer in Gurkha Allied Rapid Reaction Corps Support Battalion, Gloucester.

Captain Narendradhoj Gurung’s career has allowed him to serve in multiple locations all around the world, including Falkland Islands, Kosovo, Kuwait, Jordon, Canada, Kenya, Iraq, Nepal and three times in Afghanistan. Captain Narendradhoj is currently serving at APC Glasgow as an SO3 Soldiers QGE.

Find out more about the QGOO role