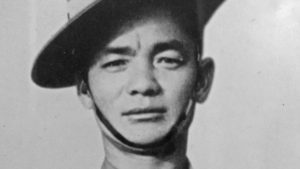 Bhagtasing Pun’s service with the 2nd Goorkhas (Sirmoor Rifles) runs like a silver thread through the regiment’s history, from India’s prewar North-West Frontier to the revolt against the Sultan of Brunei in 1962.

Having spent three and a half years as a Japanese prisoner of war, it seemed that Bhagtasing could not get enough active service. He went on to win the Military Medal for bravery and patrolling skills, helping to rid the Malayan jungle of communist terrorists.

Sent from India with a reinforcement draft to Singapore in early 1942, Bhagtasing had joined the 2nd Goorhkas preparing for the island’s defence, having been pushed back from Alor Star in the extreme north of the Malay peninsula by two of the best Japanese divisions supported by ground attack aircraft.

Digging in on positions astride the north-south Bukit Timah road, the battalion was confident of holding its ground, but the air superiority of the Japanese was decisive. On hearing the order to surrender, the riflemen could not believe it; they had been brought up to fight and never submit. They were marched off to Changi in eastern Singapore to begin three and a half years of hard labour, including work as coolies in the harbour and on the Thailand-Burma railway.

When the 2nd Goorkhas were transferred from the old Indian army to the British Army on the Partition of India in 1947, Bhagtasing found himself once again in Malaya, where communists were about to conduct a campaign of violence against the British colonial administration. Although never more than 20,000 in strength, the terrorists inflicted mayhem on the rubber and oil-palm plantations, assassinating European managers and terrorising the tappers into providing food and funds to support them.

Sergeant Bhagtasing, commanding a platoon of 2nd Goorkhas, located a terrorist jungle camp in the Batu Anam district of Johor. After summoning a second platoon, he killed all but two of the 14 occupants and captured one of the survivors. He was awarded the Military Medal for his skilled jungle craft and inspiring leadership. On another patrol he found and attacked a terrorist camp from which documents revealing the communists’ strategy and immediate plans in the region were seized.

Bhagtasing Pun was born in 1917 in Ramche village in the Myagdi district of west Nepal, the son of farmers. He received no formal education before enlisting in the 2nd Goorkhas in 1937, having walked from his village to the Indian frontier.

On return from being a prisoner of the Japanese in 1945 he married Naumati Pun, the daughter of a farmer in his home village, who predeceased him. They had two sons and three daughters. One of the sons, Bishnu, followed his father into the 2nd Goorkhas and served in the Prince of Wales’s household for two years before retiring as a major after being made a Member of the Royal Victorian Order (MVO). He is now working with the Gurkha Welfare Trust based in Salisbury, Wiltshire. A grandson is serving as a captain with the Brigade of Gurkhas.

Bhagtasing attended the Coronation as part of the Gurkha contingent and received his Military Medal from the Queen in 1952. He was promoted to Gurkha lieutenant and later to captain, serving in Hong Kong and again in Malaya. He was flown to Brunei with his battalion to help to suppress the 1962 revolt against the Sultan, from whom he received a decoration.

On leaving the army in 1964 Bhagtasing returned to his village to farm. He became a social and community volunteer, putting great effort and much of his time into developing a school, where he occasionally taught.

He was a robust Gurkha pensioner for more than 50 years and received congratulatory greetings from the Prince of Wales on his 100th birthday. He attended the 50th anniversary parade to mark the end of the war in the Far East in 1995 and took a prominent part in the 2nd Goorkhas’ 200th anniversary durbar in 2015.

His death surprised many of his his fellow villagers, who had come to regard the old soldier as virtually indestructible.