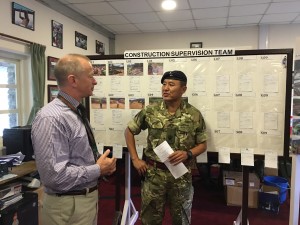 Whilst on his recent visit to Nepal, Colonel Brigade of Gurkhas (Colonel James Robinson) made a visit to Construction Supervision Team for Op MARMAT 4 who are organising the various building works across the area affected by the earthquake in 2015.

Massive earthquakes in April and May 2015 caused terrible destruction in wide areas of central Nepal. Entire villages in isolated rural areas of the Himalayan foothills were flattened.

Thousands were killed and millions of people across Nepal were left homeless, including around 1,200 Gurkha veterans and widows.