Almost 500 soldiers from A (Delhi) Company, B (Sari Bair) Company, Support (Medicina) Company, Headquarter (Burma) Company and attachments from across the Brigade deployed to Kosovo under command of The First Battalion, The Royal Gurkha Rifles (1 RGR) Battlegroup Headquarter as part of Operation ELGIN.

1 RGR’s deployment was timed to coincide with Operational Rehearsal Level 2 (OPREH L2), a key test of readiness and effectiveness for the SRF and other NATO forces held at readiness for the region. The 2021 rehearsal focussed on developing interoperability for the most likely situation in which the SRF could be called to Kosovo from the UK, a public order (PO) event. OPREH L2 was designed to allow the NATO allies to work and integrate with each other in training, to make us a more effective team if we were called upon to operate together in response to a serious breakdown in security.

Following rigorous training in Lydd Village and live firing in Sennybridge over the summer, the Battalion was well drilled and versed for this task. After flying to Pristina, A Company were quickly re-tasked to Operation ALLIED SOLACE, with the remainder of the Battlegroup concentrating on Operation ELGIN and the OPREH L2. After settling into an American base to the south of the capital, Camp Bondsteel, the first task was to hold a demonstration day of our capabilities to other NATO nations taking part in OPREH L2. These nations included Romania, USA, Turkey and Italy, as well as several others. This event was designed “by soldiers, for soldiers”. It enabled all NATO nations to see each country’s PO drills and tactics. 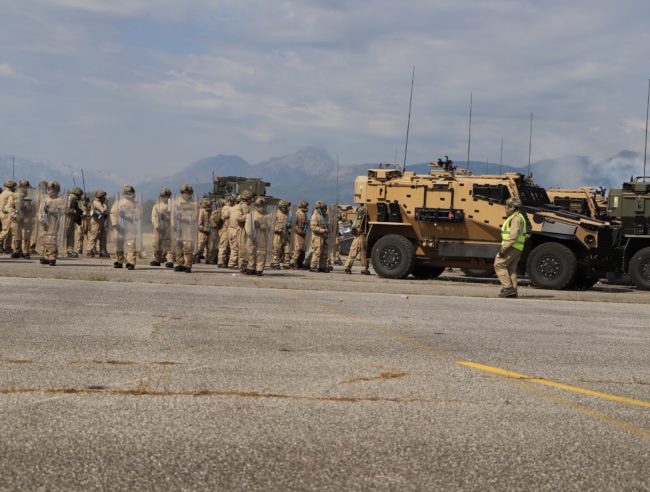 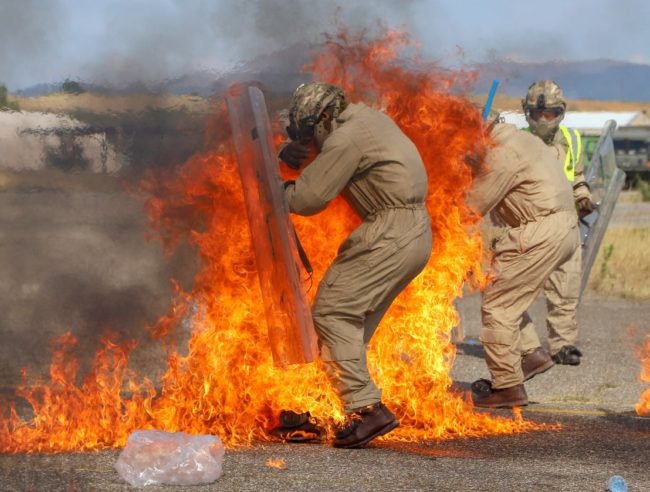 Following the demonstration day, our attention quickly turned to a Distinguished Visitors (DV) Day, designed to showcase KFOR’s capabilities to senior military and political figures from each Troop Contributing Nation (TCN). At Gjakova Airfield in the south-west of Kosovo, over 1000 soldiers gathered to demonstrate how NATO would react to a serious event. The scenario involved a mission to rescue a stranded Liaison Mentoring Team (LMT) from a violent, rioting crowd. LMTs are important to NATO’s mission in Kosovo, with each district in the country having teams permanently deployed to understand the population’s feelings on the ground.

On the day of the demonstration, a platoon from the Italian Army advanced to push a large and aggressive crowd to a series of barricades constructed of vehicles. This was conducted with the aid of the Psychological Operations team from Denmark, who urged the crowd to disperse. Once the Italians had reached the barricades, Ukrainian search dogs were deployed to ensure the barricades were clear of any explosives, before a Swiss detachment cleared the barricades using heavy machinery with ease. The Italians surged into the gap, pressing the crowd back, supported by a fleet of Turkish and Albanian armoured vehicles. Here entered 1 RGR, with B Company providing a relief in place to the Italians. The crowd became more hostile as B Company pushed through, with petrol bombs being thrown into our ranks. As a result, a casualty extraction took place; two individuals swiftly passed through the medical chain, with the help of our attached medics, and were placed into an awaiting Black Hawk helicopter for extraction to the nearest Role 1 Medical Facility in Kosovo. Following the casualty evacuation, B Company fought their way to the LMT, who were trapped in their vehicle. Support Company, mounted in Foxhounds, echeloned through; rapidly deploying from the vehicles in PO kit to take identified hardcore rioters from the crowd. Concurrently, a MAN Recovery Vehicle came forward to remove the stranded LMT and vehicle. Support Company and B Company then held the ground as the riot was defused. 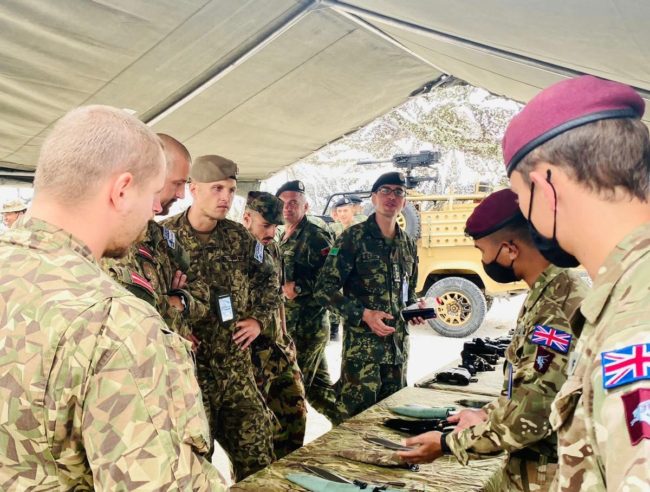 1 RGR remained in Kosovo for several weeks, conducting field training exercises in the mountains surrounding Gjakova and other operational activity with the in-place KFOR nations This exercise included a Company-level Air Assault in US Black Hawk helicopters and culminated in a demanding and complex clearance of a trench system as a Company.