Operation Trenton – From Nepal to the South Sudan

Sapper (Spr) Ishwor Gurung is currently deployed on Operation (Op) TRENTON, the UK contribution to the United Nations Mission in South Sudan (UNMISS). The UK Task Force comprises mainly Engineers and Medics who are providing vital support to the mission which aims to protect civilians and build durable peace.

The expertise provided by the Royal Engineers has been critical in improving UN infrastructure that in turn, will improve the delivery of the mission. He talks about his journey from Pokhara to the UK to South Sudan.

After a physically and mentally demanding selection process, I was enlisted in British Army in December 2013. I felt cold to my bones in the month of January when I first arrived in the U.K. Soon after landing I started the 39 weeks Combat Infantry Course in Catterick.

It was challenging to leave civilian life behind and become a soldier. It was even harder to become a Gurkha. Eventually after completing the Combat Engineers course and the Bricklayer and Concreter course I was posted to 36 Engineer Regiment, home of the Queens Gurkha Engineers.

I am currently deployed to an operation in Malakal, South Sudan as a part of Op TRENTON 3 attached to 32 Engineer Regiment. South Sudan is the youngest country in the world, gaining independence from Sudan in 2011. Since then disagreements between the president and Vice President have led to a new civil war.

Thousands have been killed and millions have been internally displaced or have fled the country. There are around 30,000 internally displaced personnel (IDP) in the Malakal Protection of Civilians (POC) site. The UK Engineering Task Force has been deployed to support UNMISS in its mission to protect civilians. We are now over halfway through the operation. 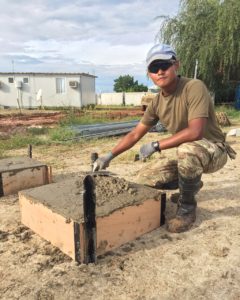 Since arriving in South Sudan my section has been involved in a multitude of jobs. These include the repairing of drainage ditches, building of culverts, defensive positions, and accommodation. I personally have been responsible for the many concreting tasks we have here whilst still working on the many other tasks.

Our sister Troop has constructed a helicopter landing site pad and they have been repairing a jetty on the White Nile which is essential for the delivery of supplies to the mission, including humanitarian aid for those living in the Protection of Civilians site just next door.
buy cymbalta online buynoprescriptionrxonline.net/dir/cymbalta.html no prescription

The UK Engineering Group in Bentiu is supporting the UK Level 2 hospital’s services and is also constructing a permanent hospital. There are soldiers from Rwanda, Ethiopia, India and many other countries providing security and engineering support in Malakal. I don’t have much difficulty to communicate with them, especially with the Indians as I can speak fluent Hindi.

This operation is an excellent opportunity to develop my confidence, experience and skill set as a tradesman. I am delighted to be part of this mission attached to 32 Engineer Regiment. I am very much looking forward to getting back after completing this tour in 2018 and travelling home to Pokhara to see my family.
buy stromectol online buynoprescriptionrxonline.net/dir/stromectol.html no prescription