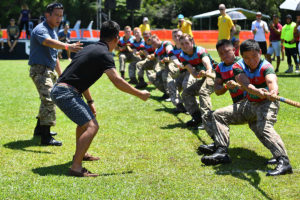 Soldiers from 2 Royal Gurkha Rifles and the Jungle Warfare Division were on hand to talk to members of the public about their key role here in Brunei.

This year saw the 26th Panaga Highland Games. From relatively humble beginnings, the Panaga Highland Games have grown to include the whole community. Teams from BSP, the Garrison, local communities and businesses all compete together in traditional Scottish track and field events, including the ever popular Tug of War.

Event organiser, and this years’ Highland Games Chieftan, Craig Forbes, said, “The Scottish community here in Brunei enjoys a great relationship with the garrison. As well as competing against each other during the Highland Games, we regularly play fierce but friendly football and rugby matches with soldiers form British Forces Brunei.”

Nepal news. We are going to bring you some top tip

Corporal Kiran Thapa of The Second Battalion, The