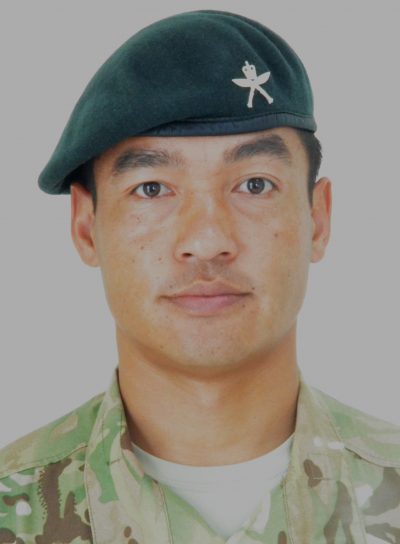 Major Jiwan Pun is the 15th Gurkha Major of The First Battalion, The Royal Gurkha Rifles (1 RGR). He arrives following his staff appointment as Deputy Chief of Staff (DCOS) to the Watchkeeper Force under Joint Helicopter Command. Previously, he served as DCOS British Forces Somalia and was responsible for the J1/4/8 support of UK troops in pursuit of the UK’s Somalia strategy.  Prior to Somalia, he commanded Headquarters (Burma) Company, 1 RGR under 16 Air Assault Brigade Combat Team.

Major Jiwan Pun was born at Righa, Baglung District and enlisted into the Brigade of Gurkhas in January 1995. On completion of basic military training in the UK, he joined C (Mogaung) Company, 1 RGR then based in Hong Kong. He was posted into the Signals Platoon in 1997, where he served in various appointments including as an Instructor at the Infantry Signals Division in Warminster. On promotion to Warrant Officer Class Two, he was appointed as the 1 RGR Battlegroup Operations Warrant Officer and deployed on Operation HERRICK 12 in Nahr-e-Saraj (South) Afghanistan and subsequently assumed the role of B (Sari Bair) Company Sergeant Major.

On commissioning in April 2012, he was appointed as a Platoon Commander in 1 RGR and deployed on Operation HERRICK 17 as the A (Delhi) Company Battle Captain under 40 Commando Royal Marines in NES(S). He then assumed the role of Second in Command A (Delhi) Company. In July 2016, he was appointed as the Quartermaster (Technical) 1 RGR and involved in the Unit Move 2017, Air Manoeuvre Battlegroup and Operation TORAL deployment. He was promoted to Major in July 2018.

Major Jiwan Pun has deployed on operations to Bosnia (1997 and 2003), Kosovo (1999, 2005 and 2019), Afghanistan (2007, 2010, 2012 and 2018) and Somalia (2021). In 2006, he received The Prince of Wales Khukuri award in recognition of his meritorious service to enhance the good name of The Royal Gurkha Rifles as an Intelligence Surveillance Reconnaissance Task Force Signals Detachment Commander as part of Support (Medicina) Company Group deployment in Kosovo and a Signals Instructor in Warminster.