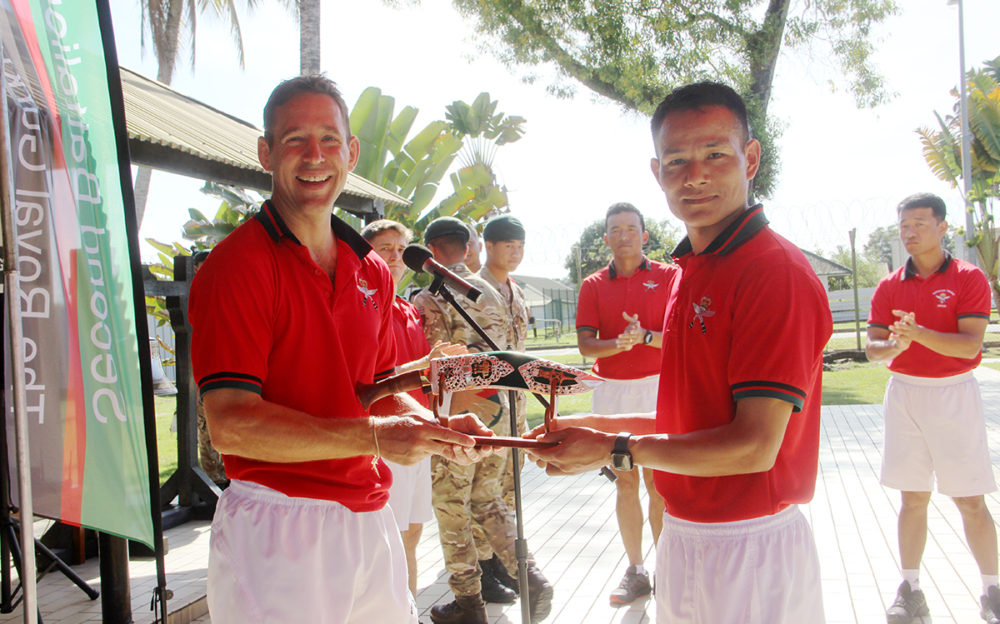 Colour Sergeant Dik Limbu is a senior non-commissioned officer in the finest traditions of 2 RGR and the Brigade of Gurkhas. In the period covered by this citation he has been a Colour Sergeant instructor in the Senior Division of the Infantry Battle School in Brecon, and more recently CQMS C (Tamandu) Company in Brunei. Throughout, he has demonstrated the highest levels of military conduct and professional excellence.

Operationally proven with four tours of Afghanistan to his credit, and a record of consistent high achievement, He was the clear choice for a prestigious instructor position at the IBS.  In an environment where directing staff must epitomise the values and behaviours they are seeking to instil, he stood out from the first days of his posting as an outstanding coach and mentor. At the end of his second year, he was ranked as the very best of 61 others, handpicked from across the Infantry to represent their cap-badge at Brecon.

This exceptional result is the product both of remarkable levels of application and special personal qualities.  Colour Sergeant Dik is first and foremost a formidable, best-in-class, operator.  He has received distinctions on various promotion courses and instructors’ recommendations. He also passed the machine gun platoon commander course as the top student and holds instructor recommendations from both the jungle warfare and operational tracking instructors’ courses.

At the Infantry Battle School Colour Sergeant Dik was noted for his singular ability to connect with students from all backgrounds and inspire them to push beyond their self-perceived limits. He was also the Senior Division lead for rewriting doctrine and his submissions have been published in the ‘Brecon Battle Book’ and are in use across the British Army. While at the Infantry Battle School, he also voluntarily deployed to Brunei to support the Jungle Warfare Division.

Since arriving at C (Tamandu) Company, Colour Sergeant Dik has continued in the same vein. His capacity is such that he not only performs his G4 role flawlessly but also contributes to all other aspects of Company life as well. In recent months he has taken the lead on FIBUA training, represented the Company across multiple sports, and played a vital role in planning key battalion level activities including Junior Leadership Cadre 2020 and the 2019 Recruit Induction Cadre. Every-day, he sets a powerful example for our junior soldiers, never missing a PT session and invariably leading from the front. At 35 years old he remains one of the best cross-country runners in the battalion.

s work responsibilities he has also found the time to work towards an Open University Degree in Computing and Information Technology. This boundless hunger for self-improvement is only exceeded by his humility and selfless commitment to the soldiers in his charge. An extraordinary talent who promises so much for the future; Colour Sergeant Dik has proved a model ambassador for the Brigade of Gurkhas and is fully deserving of formal recognition.