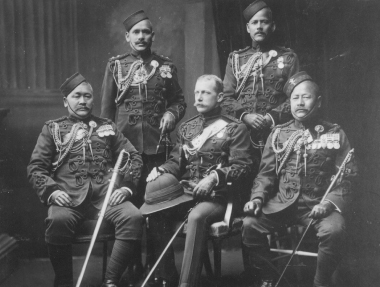 Queen Victoria employed Indian servants in the Royal Household from 1887.

Munshi Abdul Karim quickly won the monarch’s devoted affection. He was employed as ‘Munshi and Indian Clerk to the Queen Empress’ at a salary of £12 per month. At this time no Gurkha staff were employed.

From the time of his Coronation in 1901 King Edward VII commanded that he be attended by six Indian Army Orderly Officers. The year following the Coronation the number was reduced to four, and from that time onwards until the outbreak of war in 1939, the four ‘King’s Indian Orderly Officers’ were annually in attendance on the Sovereign. Gurkhas shared this honour with Rajputs, Mahrattas, Pathans, Sikhs and other chosen representatives of the British Indian Army. In 1910 these Indian Orderly Officers (two of whom were Gurkhas at the time) took their turn with the officers of the Household Cavalry and the Foot Guards to stand guard at the catafalque in the Great Hall of Westminster at the King’s Lying-in-State. Rudyard Kipling immortalised this event in a short story called “In the Presence

It is an honour to be chosen for these appointments and the highest standards are looked for in the officers selected to fill them. Her Majesty has appointed all Queen’s Gurkhas Orderly Officers to be Members of the Royal Victorian Order.