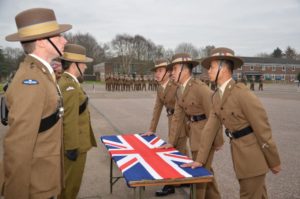 There were 48 new trainees who arrived at the Gamecock Barracks after completing their arduous training in Gurkha Company, ITC Catterick.

At 1030hrs, trainees; along with all the squadrons of the Queen’s Gurkha Signals, marched onto the parade square at Gamecock Barracks.

The guest of honour for the day was Brigadier JJ Cole OBE; Colonel of the Regiment QG SIGNALS who took the salute from Parade commander and gave permission to carry on with the parade.  The Colonel of the Regtiment was accompanied by the Commander QG Signals, Lieutenant Colonel M Fayers and the Gurkha Major (GM), Major Omprashad Pun.

The parade started with a smart march off by the recruit intake 2016 attestation party who halted in front of the Union Jack draped table opposite to the Colonel of the Regiment, Commander QG Signals & the Gurkha Mahor QG Signals and took an oath that “they would remain loyal and faithful to the Queen’s Gurkha Signals all the times and they would be obedient to Her Majesty the Queen, to the Regiment and to the seniors”. In the background, religious teacher Mr Jagdish Paudel recited mantras from Bhagavad Gita throughout the swearing of the oath.

The second event was the award of the LS&GC medals to the medal recipients who received their medals for their 15 years of exemplary conduct and the loyal service to the crown.

Seven LS&GC medals were awarded by the Colonel of the Regiment to the soldiers while Mrs Sukmaya Pun, wife of the Gurkha Major QG Signals, Major Omprashad Pun greeted the wives of the LS&GC medal recipients with flower bouquets concurrently. 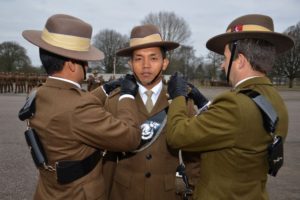 Lastly as per the Regiment’s tradition, the Colonel of the Regiment and the Gurkha Major officially commissioned Captain Sureshkumar Limbu and Captain Ashok Gurung and the wives of the newly commissioned officers were greeted with the flower bouquet by Mrs Sukmaya Pun.

After the ceremony, the Colonel of the Regiment delivered his inspirational speech, signifying the importance of the day both in Nepali and English languages for QG SIGNALS soldiers and the families.  He also welcomed the new trainees to the Regiment and congratulated newly commissioned officers and the recipients of the LS&GC medal.

Group photographs were taken after the parade where the trainees were accompanied by QG SIGNALS officers, training staff, religious teacher and pipes and drum team.

The Commander QG SIGNALS also announced trade allocation results to the trainees. This year the allocation was 12, 32 and 4 for Communications System Engineer (CS Eng), Communications System Operator (CS Op) and Royal Signal Electrician (RSE) respectively. The trainees took this opportunity to appreciate the hard work put in to their training by the training staff to craft their training package which was a genuinely a success.  At the beginning of 2017, the trainees will move to the Defence School of Communications and Information (DSCIS) at Blandford for their respective trade courses.