On Sunday 08 May 2016, the Queen’s Gurkha Signals exercised their Right of Freedom in Blandford Forum that was first granted to them in 2005.

The right of ‘Freedom of the Town’ is an ancient privilege and allows a Regiment to parade through the town with ‘bayonets fixed, drums beating and colours flying’.  It comes from a period in history when only trusted units would be allowed to carry arms within the town’s boundaries. 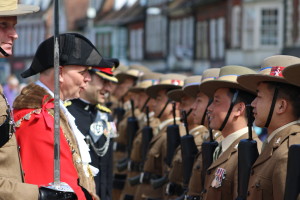