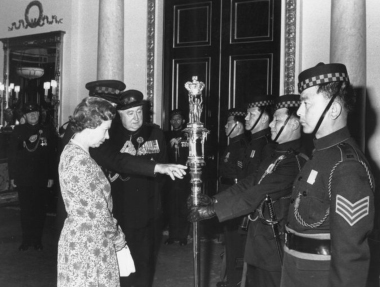 The history of the Truncheon dates back to the time of the Indian Mutiny when The Sirmoor Battalion (later the 2nd KEO Gurkha Rifles) particularly distinguished itself by holding the Ridge during the siege of Delhi.

Here they fought along side the 60th Rifles.  During the prolonged action all its officers and 327 of its 490 other ranks became casualties.

For the Battalion’s outstanding service during the Mutiny, Queen Victoria was pleased to grant it a third colour inscribed ‘Delhi’ in English, Hindi and Persian. (The Sirmoor Battalion already held a Queen’s Colour and a black Regimental Colour.) At the same time additional distinctions were awarded to the Battalion. Henceforth, the rank and file were to be known as Riflemen, the title was changed to the Sirmoor Rifle Regiment and the Battalion was authorised to wear the uniform of the 60th Rifles (now The Rifles). The affiliation with The Rifles remains to this day.

It was not considered appropriate for Rifle Regiments to carry colours and uniquely Her Majesty Queen Victoria presented the regiment with the Truncheon to be carried in lieu of this third colour. The Queen’s Truncheon is ‘accorded all the dignities and compliments appropriate to a King’s Colour of Infantry’. Since the Queen’s Truncheon was passed to the Royal Gurkha Rifles it has continued to be held in the greatest reverence. Accordingly all New Recruits continue to be sworn in to the Regiment in the presence of the Queen’s Truncheon.