British Gurkhas Nepal (BGN) has completed Central Selection and 126 new recruits have been selected for the British Army and our Brigade.  BGN handed over the 126 recruits to the Officer Commanding Gurkha Company Catterick and his instructors on the 20 Dec 13.  Using the results of Central Selection the recruits have since been organised into five equally balanced platoons and immediately UK Induction Training began. The training readies them for the demanding 39 week Combat Infantryman’s’ Course (Gurkha) (CIC(G)) in Catterick and importantly prepares them and their families for the imminent transition from Nepal to UK.  The training programme includes kit issue, haircutting, documentation, issuing of Army numbers, drill lessons, physical training, a families / welfare day, a pay parade, Gurkha Welfare Scheme briefs, a visit to the area Welfare Centrae at Kaski, medical vaccinations and the legendary brief from Lt Col (Retd) J P Cross OBE.

The recruits were moved from Pokhara to Kathmandu and then flew into Manchester airport. They were then moved by coach to Catterick where they have now begun their training.

Click this link to see the video footage of RI2014 arrival at their training centre. 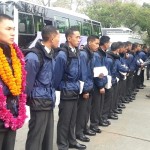 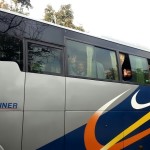 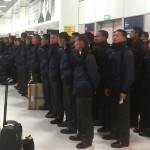 At the Manchester Airport