The Attestation Parade for Recruit Intake 2014 (RI14) was hosted by British Gurkhas Pokhara (BGP), situated below the panoramic view of the Annapurna mountain range. After a rigorous and competitive selection process, only 126 potential recruits out of thousands made it through to become soldiers in the Brigade of Gurkhas.

3 January 2014 was a day to be proud for the new recruits, their families and friends. BGP had put in a tremendous amount of effort throughout the year to ensure this day was a great success. Chief of the General Staff (CGS)/Col Comdt Bde of Gurkhas General Sir Peter Wall GCB CBE ADC Gen was the inspecting officer; other VIPs were also in attendance, they were: Lady Wall, the Brigadier General of the Nepal Army and the DIG of the Nepal Police Force, together with many more spectators who had come to watch the parade.

At 1030 hrs, 126 recruits marched on to the parade ground accompanied by the Brigade Band. You could see the pride on the spectators faces as the recruits took their oath of allegiance to the Crown and to keep Gurkha history alive with its own ‘Gurkha Kaida’. The CGS gave a speech in Nepali language highlighting the importance of the day, the day the recruits finally became Gurkha soldiers.
After the recruits marched off the parade ground, a group photograph was taken before the recruits and their families and friends had the chance to meet and greet with the CGS. A big curry lunch stall provided delicious food for all of the guests in the aid of Army Benevolent Fund The Soldier’s Charity.

The day ended with a last dance being performed by all the recruits for their families and friends before they had to say goodbye to their loved ones, an exceptionally emotional moment for all. 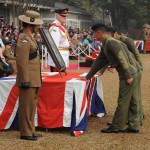 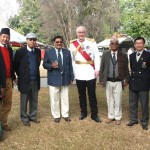 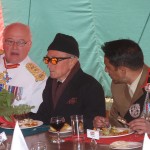