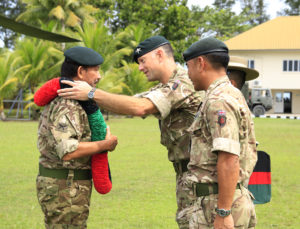 Sultan of Brunei is arrives at 1 RGR

His Majesty arrived by helicopter and was welcomed by The Commander, British Forces Brunei, Lieutenant Colonel Charlie Crowe, and The Gurkha Major, Major Shuresh Thapa MVO.  They welcomed him in a traditional Gurkha Ceremony by placing a garland of Regimental Colours over His shoulders, before escorting His Majesty into the Garrison Officers’ Mess.    HM was welcomed by an Honour Guard, commanded by Captain Ganesh Kumar Gurung, in the Mess garden overlooking the South China Sea. 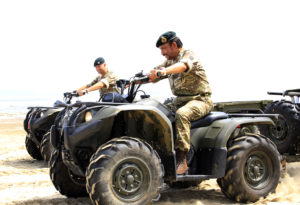 His Majesty then observed a capability demonstration of a Company Raid Operation, made up of members of the Battalion’s Rifle Companies, and Specialist Weapon Platoons including the Reconnaissance, Sniper, Mortar, Machine Gun and Anti-Tank Platoons.  His Majesty moved amongst the fighting troops before watching an extraction onto the beach and out to the sea by Rigid Inflatable Boats provided by the Garrison Boat Section.  His Majesty was then briefed on 1 RGR’s all-terrain quad bike and had the opportunity to test-drive it on the beach. 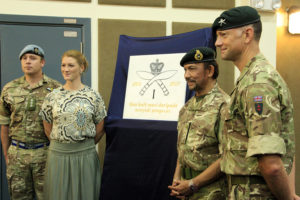 His Majesty then moved into the community centre to meet staff and pupils from Hornbill School, the Battalion’s Hindu Religious Teacher, Pundit Bishma Niraula and members of the Army Welfare Service.

The Commander, British Forces Brunei, Lieutenant Colonel Charlie Crowe thanked His Majesty for his continued support to the Regiment and presented a carved and gilded marble plaque with The Royal Gurkha Rifles’ Cap Badge and carved underneath in Malay, The Regimental Motto.  His Majesty then departed to three cheers from all ranks in British Forces Brunei and a rendition of the traditional ‘march-off’ for HM’s Royal Brunei Armed Forces from the combined Pipes and Drums.