Under the command of Major Bijayant Sherchan with gurujiharu Sergeant Ramesh Rai and Sergeant Haribahadur Thapa Magar, the intensive language instruction in British Gurkhas Pokhara (BGP) lasts for ten weeks and is followed by a Directed Duty Trek (DDT) in either the East or West of Nepal.

This February ten of the finest chadke officers descended on Pokhara to learn the basics of Nepali language, the unique culture of Nepal and its people, and to see where their soldiers have come from.

A Troop Commander in the Queen’s Own Gurkha Logistic Regiment (QOGLR). Lt Hoccom’s remarkable fitness and determination saw him achieve the fastest Doko Race time. Each potential Gurkha recruit must undergo this race, an arduous uphill run completed carrying a traditional Nepalese weighted basket upon the back. It is a rite of passage of British Officers serving within the Brigade to complete this course. Lt Hoccom also arranged for the course to undertake the Annapurna Base Camp Trek on a weekend off, an opportunity for the students to see the wonders of the Himalayas on their doorstep.

A Troop Commander in the Queen’s Gurkha Engineers (QGE). Lt Tarrant-Taylor undertook his DDT trekking around Lamjung in the West of Nepal. During the DDT, alongside visits including school and water projects, Welfare Pensioners were visited. Welfare Pensioners are ex-service personnel, who served within the Brigade but did not qualify for a Service Pension, or their dependents. On the trek, the task is to check on their health, home, and well-being. Since the individuals live in rural hill areas, this trek was particularly arduous, and each officer took three porters to support them.

2 Royal Gurkha Rifles (RGR) and please note: “wahan Nepali hoina”. Lt Cannon’s consumption of mo mos was incredible, and he consumed at least one for every word of vocabulary learnt (hundreds). Mo mos are a traditional Nepalese dumpling, which is usually steamed and served with a fresh chilli chutney. 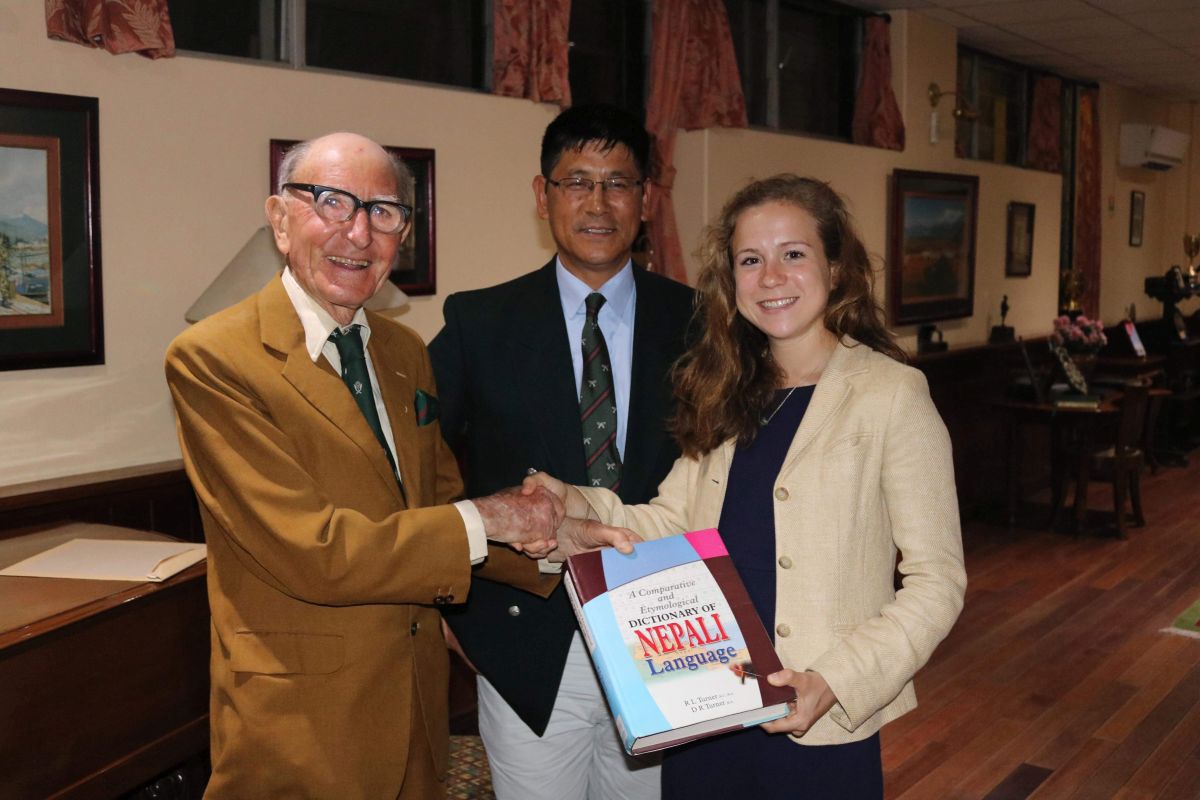 From 250 Gurkha Signal Squadron (GSS), and running entirely off Dal Bhat, (lentils and rice) the staple food in Nepal, Lt Karas achieved the JP Cross Award for Top Student. JP Cross, fluent in Nepali amongst other impressive languages, and a Nepali citizen, is known as a father figure within the Brigade. JP Cross reached the rank of Lt Colonel and served across the Brigade for 39 years. The course was fortunate to have JP Cross attend and give lectures three times during the course, about the Brigade’s founding, history, and his own arduous experiences.

A Troop Commander in 246 GSS, York.  Lt Newman led the group at the initial messing event, using a kukri for his first time. Messing is an important part of Brigade life allowing everyone to come together, socialise and cook from scratch over an open fire in a korai (large pot). He undertook his Area Welfare Centre (AWC) attachment in Gorkha, where the course also had the opportunity to visit the historic temple and palace. 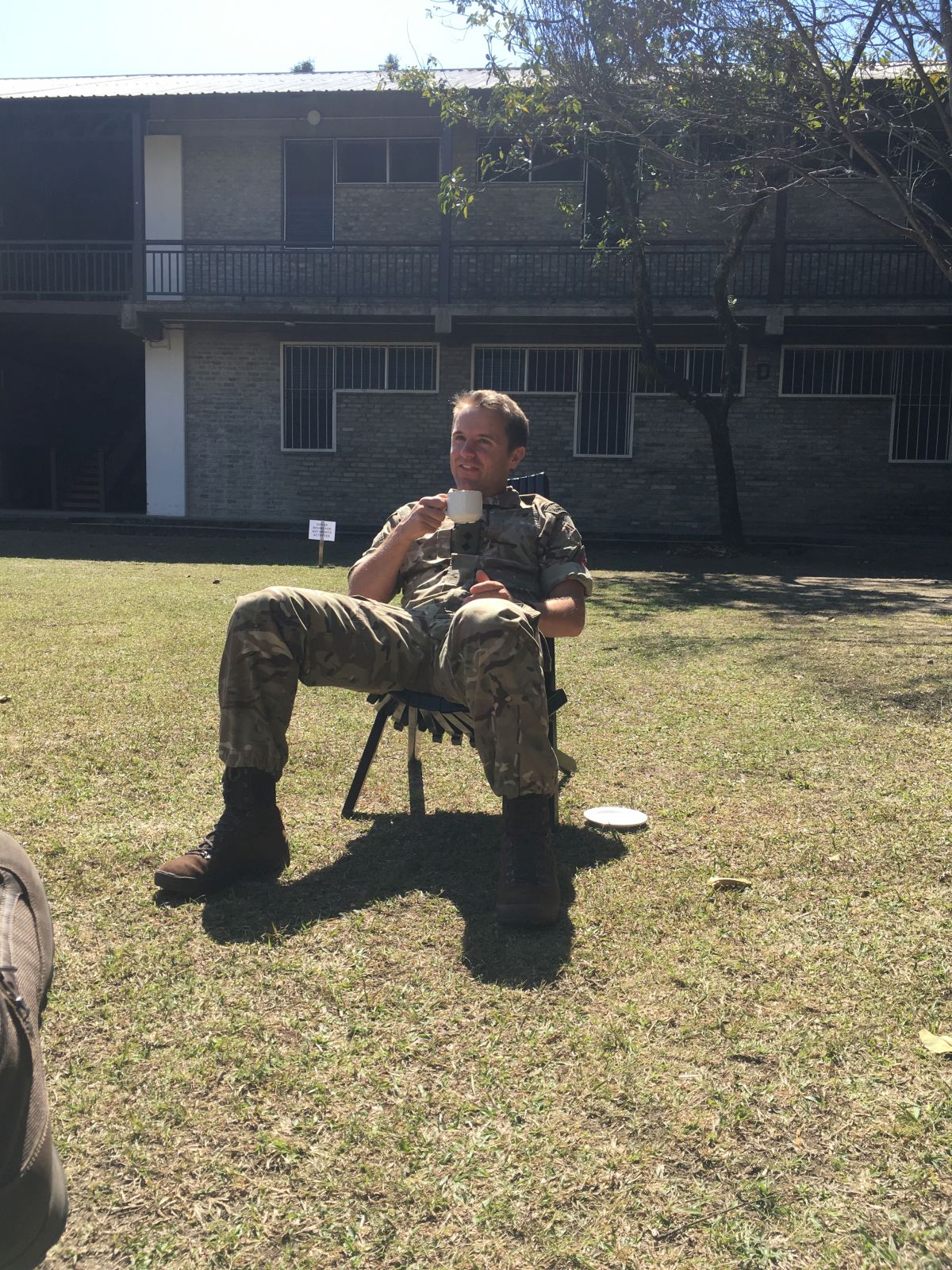 Capt Cooke is the new Engineering Project Officer for Gurkha Welfare Trust Nepal (GWT(N)), providing integral support to the projects that GWT run in Nepal, including new school builds or improvements, water projects and bridge building. He will be posted to British Gurkhas Pokhara (BGP) for the next year and can be found riding around Pokhara on his Royal Enfield or teaching surf lessons on Fewa Lake. He is a talented guitar player and during the course hijacked stages in Lakeside, performing Nepalese pop songs including Talko Pani.

A Platoon Commander in 2 RGR, Lt Atkinson grasped the language remarkably quickly. This may be attributed either to his language experience, having studied both Arabic and Spanish previously, or to his urgent requirement to learn the local Nepalese ‘chat-up’ lines. Learning some Nepalese dance moves was also a personal priority and Lt Atkinson was quick to establish an impressive “uthyo basyo” (an up-down rapid squatting dance-move).

A new Troop Commander at 4 Regiment Royal Logistic Corps (RLC), Second Lt Pearman mastered the art of the game Bagh Chal instantly and soon became course champion. Bhag Chal, or ‘Tigers and Goats’, is a traditional Nepalese board game. Simple and competitive, it is played widely in Nepal. A music enthusiast, Lt Pearman’s daily routine at BGP consisted of water parade followed by a recital of Jham Jham Pareli or Naini Taal, the traditional Brigade songs that the course learnt as part of the cultural instruction.

He can usually be found wearing his topi or dressed like the Indian Prime Minister. Kaida is integral to the Gurkhas’ successes, through his understanding of the culture and tradition in Nepal. Lt Maynard was awarded The Kaida Cup by his course mates, embracing Nepali using immersion techniques, he was also awarded the Most Improved Student. His pronunciation improved at an incredible rate; early in the course, when in a local bar, he asked the DJ to play “Talko Pani” (water of the lake) and instead received a glass of “tato-pani” (hot water)! 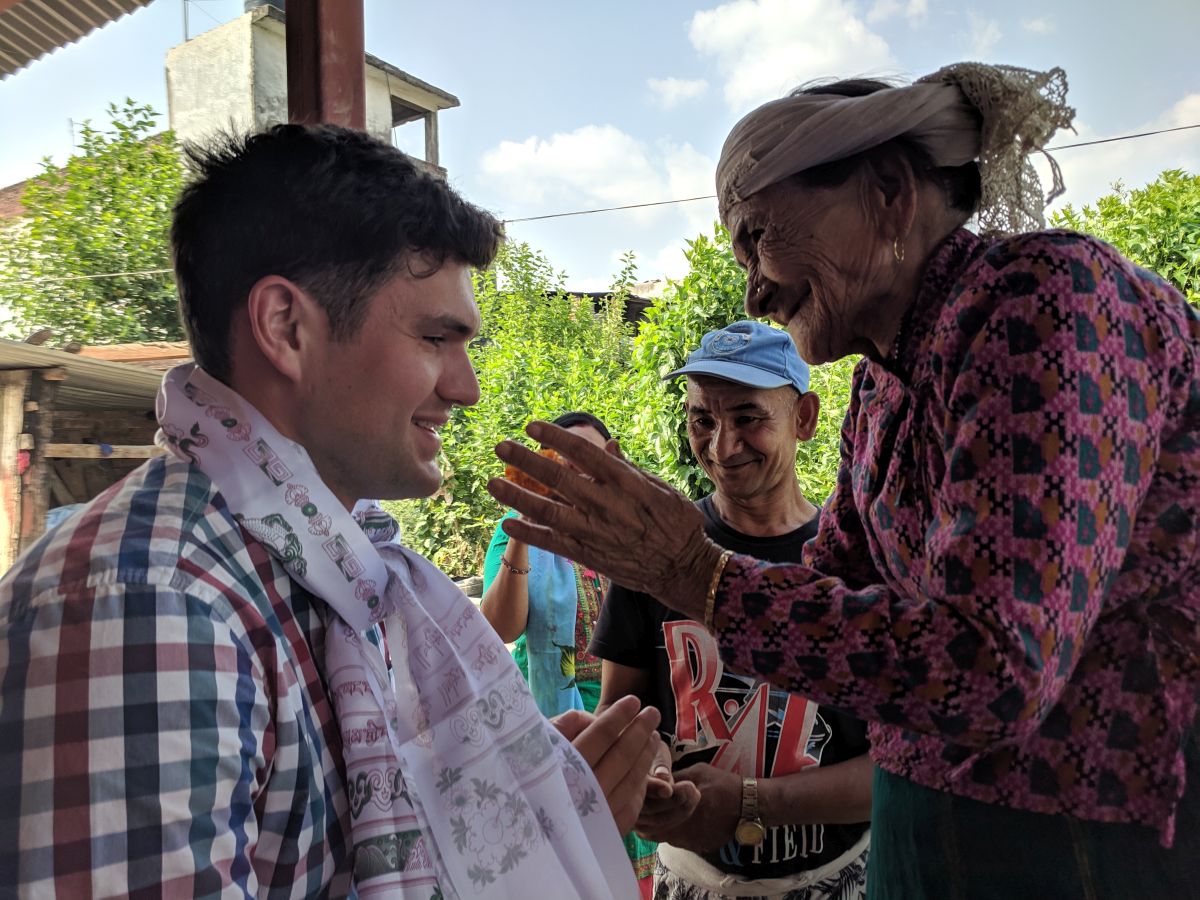 From 9 Regiment RLC. Lt Hix had recently returned from Oman. Halfway through the course, every officer does an attachment to an AWC. There are 21 AWCs across Nepal and 1 in India. They deliver the GWT services overseeing projects and supporting Welfare Pensioners. Lt Hix undertook his attachment in Butwal, West Nepal where he found that, being close to the Nepal border, there was an extra linguistic challenge: some Hindi slang would be occasionally thrown in. These attachments were great conversation practice and were also a chance to see different areas of the country. On returning to BGP, presentations had to be delivered, comparing the different experiences at different locations and as a final assessment of the students speaking ability.

The course is an important for British Officers who will command and manage Gurkhas. It allows them to engage with their soldiers in their mother tongue and truly understand the different culture and traditions practised. The trek was important to discover the more rural areas of Nepal and how far our soldiers have come since joining the Brigade, whilst also delivering an important service for GWT(N). It is an opportunity for all the cap badges to come together as course mates, but also for a bit of healthy competition. The following awards were presented: