The Brigade comes together to dine in style 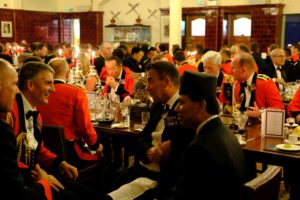 On the 5th July 2017 the Brigade of Gurkhas held their annual dinner night in Old College, the Royal Military Academy Sandhurst.

Three Hundred guests gathered in the hall and were able to feast on superb Nepali style food whilst the Band of the Brigade of Gurkhas performed traditional Nepali music from the stage.

The speeches were led by the Ambassador and followed by the Colonel Commandant.

During the after-dinner entertainment the guests were asked to sing traditional Nepali songs led by a Lance Corporal from the Band of the Brigade of Gurkhas.