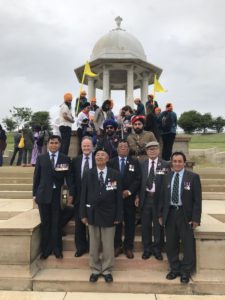 The Chattri Service this year took place on Sunday 11th June 2017 and was attended by Major N D Wylie Carrick MBE, Brigade Secretary, Captain Ganesh Tamang MVO QOGLR (QGOO) and by Mr Gavin Edgerley-Harris, Director Gurkha Museum.  Two wreaths were laid in memory of the 12 Gurkhas cremated and also in memory of all Gurkhas killed in the service of the crown.

More than 800,000 Indian soldiers fought for the British Empire.  During the four years of fighting, some 12,000 wounded combatants were brought to Britain to be treated in makeshift military hospitals. Three were established in Brighton; one was the town’s famous royal palace, the Royal Pavilion, where  King George V is said to have decreed that Indian soldiers were to be treated at the Pavilion, apparently believing that the flamboyant Indo-Saracenic building would provide familiar surroundings.

In December 1914, 345 injured soldiers were transported to Brighton by train and were transferred to the hospitals.  The King and Queen, Mayor of Brighton, Chief Constable of Brighton and other dignitaries visited frequently, and careful arrangements were made at the Royal Pavilion to provide for the different dietary and other cultural requirements of Hindus, Sikhs and Muslims wounded..

Although the great majority of soldiers recovered from their injuries, those who died were taken to a remote location high on the South Downs above Brighton, where a ghat (funeral pyre) was built so they could be cremated and their ashes scattered in the English Channel. This funeral rite was again carried out in line with religious custom.  Amongst those cremated were 12 Gurkha soldiers.

In August 1915, soon after the last cremations at the ghat site, Lieutenant Das Gupta (Indian Medical Service) and the Mayor of Brighton, Sir John Otter, planned the establishment of a memorial to the soldiers who had died in Brighton.  Funds were raised during 1917 and construction work started in August 1920 and continued until the end of that year.  The Chattri was finally unveiled on 1st February 1921 by Edward, Prince of Wales.

The Chattri, which means umbrella in Hindi, Punjabi and Urdu, was designed by E.C.Henriques from Mumbai. The dome and its eight pillars are built from white Sicilian marble. Three large granite slabs lie over the original concrete crematory bases. The design symbolises the protection offered to the memory of the dead.

The Chattri bears the following inscription in Hindi and English:

“To the memory of all the Indian soldiers who gave their lives for their King-Emperor in the Great War, this monument, erected on the site of the funeral pyre where the Hindus and Sikhs who died in hospital at Brighton, passed through the fire, is in grateful admiration and brotherly affection dedicated.”

However by the 1930s, the memorial had fallen into disrepair and was further damaged during WW2.  The War Office subsequently restored The Chattri to its original condition and by 1951, the Royal British Legion undertook annual pilgrimages to the memorial, and also contributed to its upkeep.  Although  the RBL pilgrimages ceased in 1999, in 2000 the responsibility for organising the memorial service passed on to the local Sikh community supported by the Undivided Indian Ex-Services Association.   The service is attended by the Mayor, the Chief Executive, the local MP, city councillors, representatives of the British Armed Forces, the Indian Army and veterans of the Undivided Indian Army, the Royal British Legion, the police, and local people.