The Brigade of Gurkhas operated continuously throughout the Malayan Emergency, for twelve years (1948 to 1960) against communist terrorists, and the Gurkha soldier again proved himself to be, as he had previously done in Burma, a superb jungle fighter. 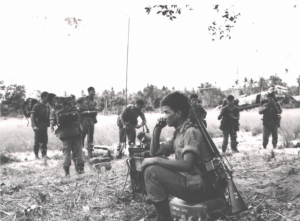 Whilst the majority of the rest of the British Army was fighting in such trouble spots as Korea, Cyprus, Kenya and Aden and maintaining a presence in the UK, Germany and other garrisons in various parts of the world, the Brigade of Gurkhas was providing the backbone, the expertise and the continuity in the campaign in Malaya.

Many British units fought in the Malayan Emergency with distinction, but never for more than two or three years before moving on to other theatres. Gurkha battalions on the other hand served on for year after year, providing the decisive ingredient for victory in this vicious war of stealth and attrition.

A peaceful period of two years followed the successful conclusion of this campaign which enabled Gurkha units once again to widen their professional horizons and train for roles other than operating against communist terrorists in the Malayan jungle One Gurkha Battalion was stationed in the United Kingdom (at Tidworth) in 1962, but was withdrawn to the Far Fast after the outbreak of the troubles in Borneo.