Stepping off for the first time from Wellington Barracks on 18th February, soldiers from the Queen’s Gurkha Engineers will provide the prestigious Queen’s Guard at the Royal Palaces in London and Windsor this Spring. This mainly ceremonial role, ordinarily undertaken by the Brigade of Guards, is carried out at Buckingham Palace, St James’s Palace, the Tower of London, and Windsor Castle.  It is the first time the Queen’s Gurkha Engineers have undertaken the duty since the Gurkha 200 celebrations in 2015, when the Brigade of Gurkhas provided a Queen’s Guard to mark 200 years of service to the British Crown.

Formed in 1948 in Malaya, since the 1990s the Queen’s Gurkha Engineers have been based in Maidstone as part of 36 Engineer Regiment. ‘Gurkha Sappers’ have been widely deployed in recent years, to Kosovo, Iraq, and Afghanistan on numerous occasions. Gurkha Engineers were deployed to Nepal in 2015, where they took on a key role in the disaster relief effort following the devastating earthquake of that year. 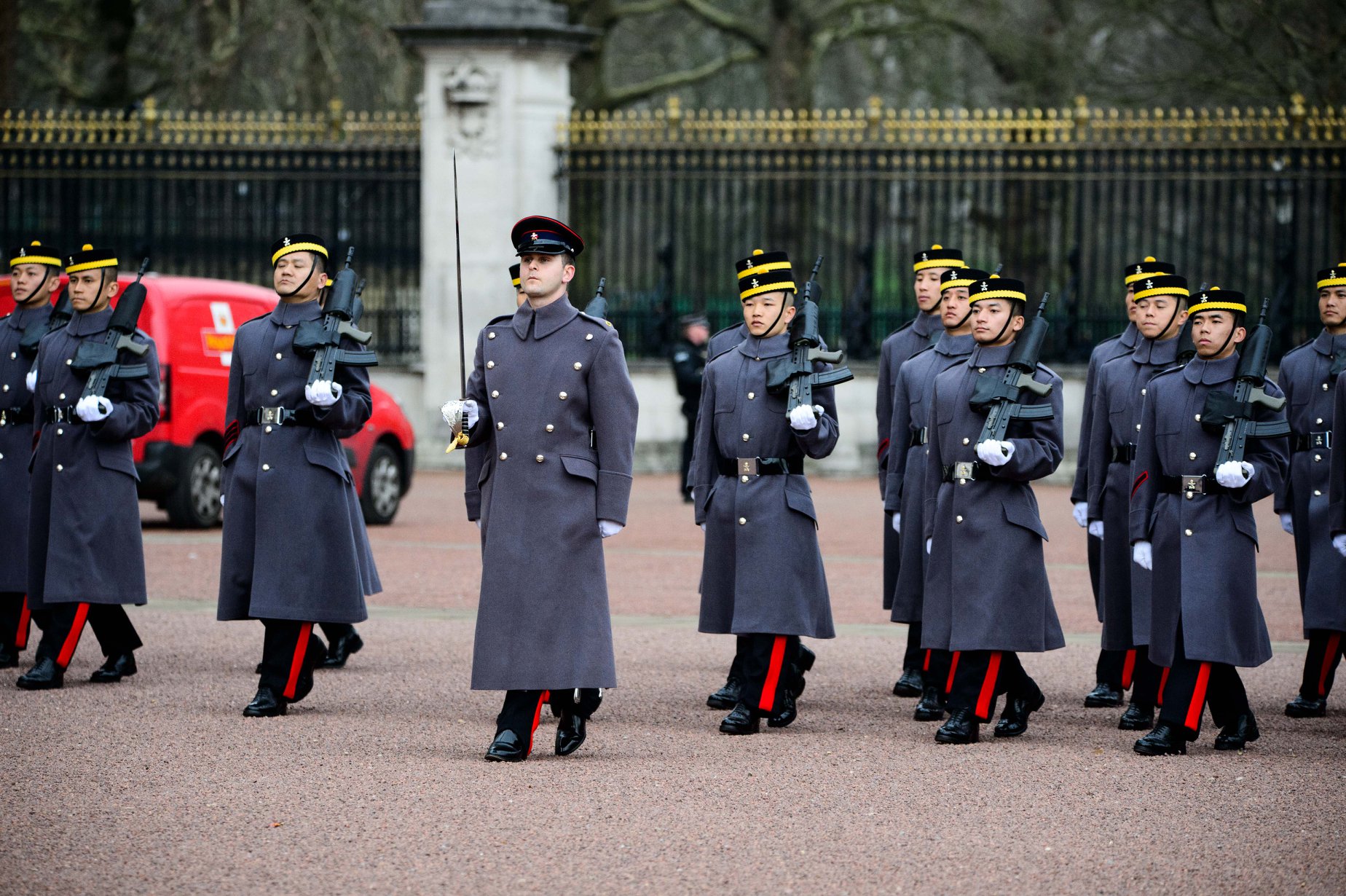 The connections with both the Brigade of Gurkhas and the Corps of Royal Engineers will be visible to spectators who come to watch the Changing of the Guard ceremony. Each Gurkha will carry a kukri instead of a bayonet on parade. These distinctive weapons are famously sharp and are useful for everything from preparing ingredients for a curry to striking fear into the hearts of their enemies, if necessary. Tourists will be able to watch the Gurkhas draw their kukris and have them inspected at Wellington Barracks immediately before the Changing of the Guard.

Major Ian Pilbeam RE, Officer Commanding 70 Gurkha Field Squadron explained: ‘It is a real honour and privilege for the Queen’s Gurkha Engineers to be providing the Queen’s Guard, it is something quite different from our normal role of providing Force Support Engineering to the Field Army.  All of those taking part are looking forward to this fantastic opportunity to highlight yet another side of the Corps of Royal Engineers and the Brigade of Gurkhas.’ 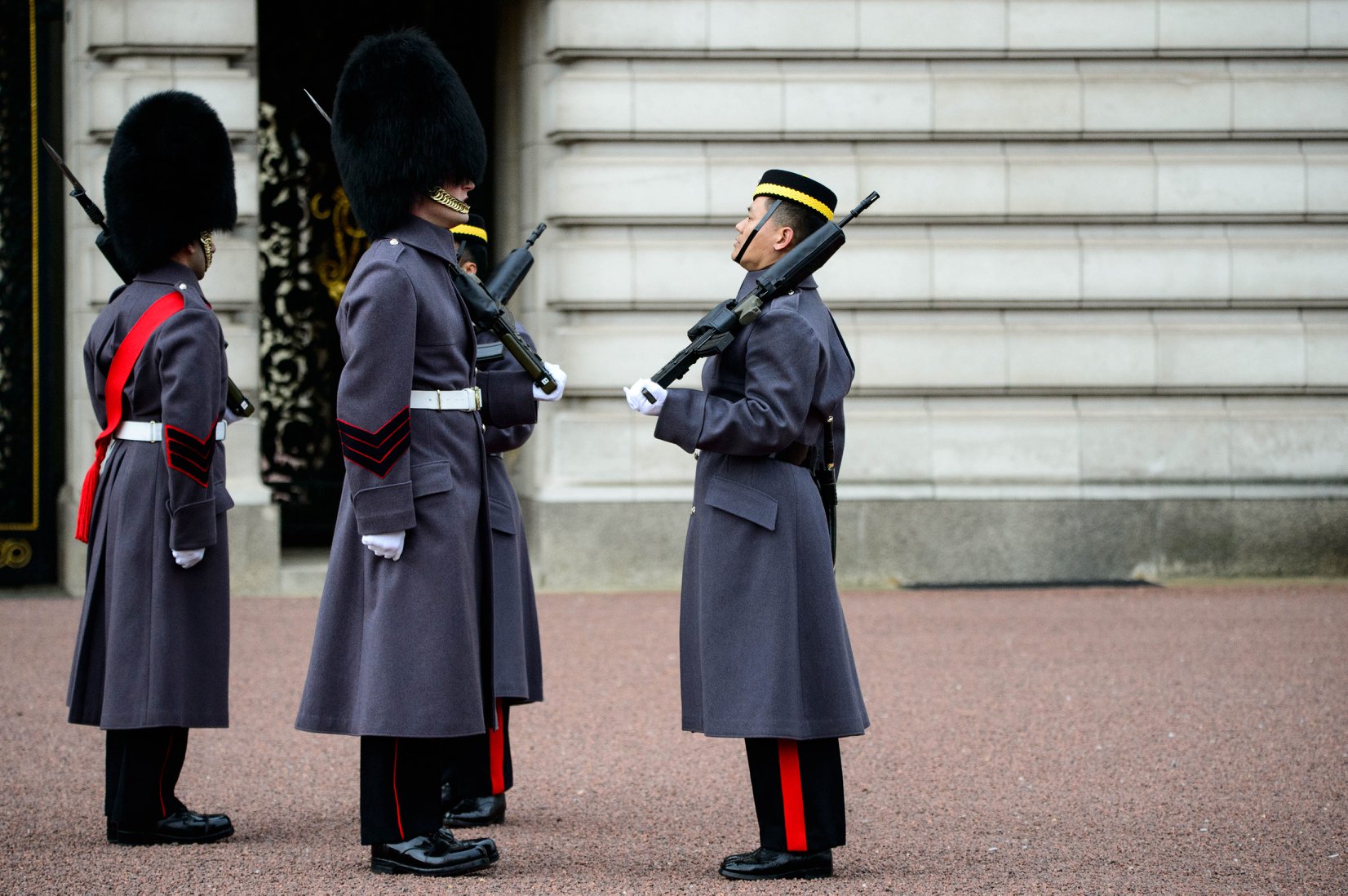 The Royal Engineers are amongst the most highly qualified soldiers in the British Army and experts at providing bridging, demolitions, and water supply for troops on operations, and skilled in trades such as bricklaying, electrics, plumbing, surveying and carpentry. The Gurkhas have now added a high standard of drill to their coterie with weeks of preparation prior to taking up their new ceremonial role.

Whilst on Queen’s Guard, the Gurkhas will wear Kilmarnock Hats on parade, as their forefathers have for two centuries. The cap badge of the Queen’s Gurkha Engineers is two crossed kukris with the ‘flaming bomb’ of the Corps of Royal Engineers on top. The black brogues worn by the Gurkhas and cross belts worn by the officers on parade are reflections of the Brigade of Gurkhas heritage as a rifle brigade. The Gurkhas are historically light infantry, and whilst on duty the Gurkha Engineers will march at the faster rate of 140 paces a minute. They will carry their rifles at ‘the trail’, or down by their side as opposed to on their shoulders like the rest of the army.  Due to their links with the Royal Engineers, the Ensign of the Guard will not carry a Colour (Regimental flag).

Sapper Bijay Ale, who joined the British Army in 2012 said: ‘It is a once in a lifetime opportunity for all of us. I am excited and looking forward to it’. 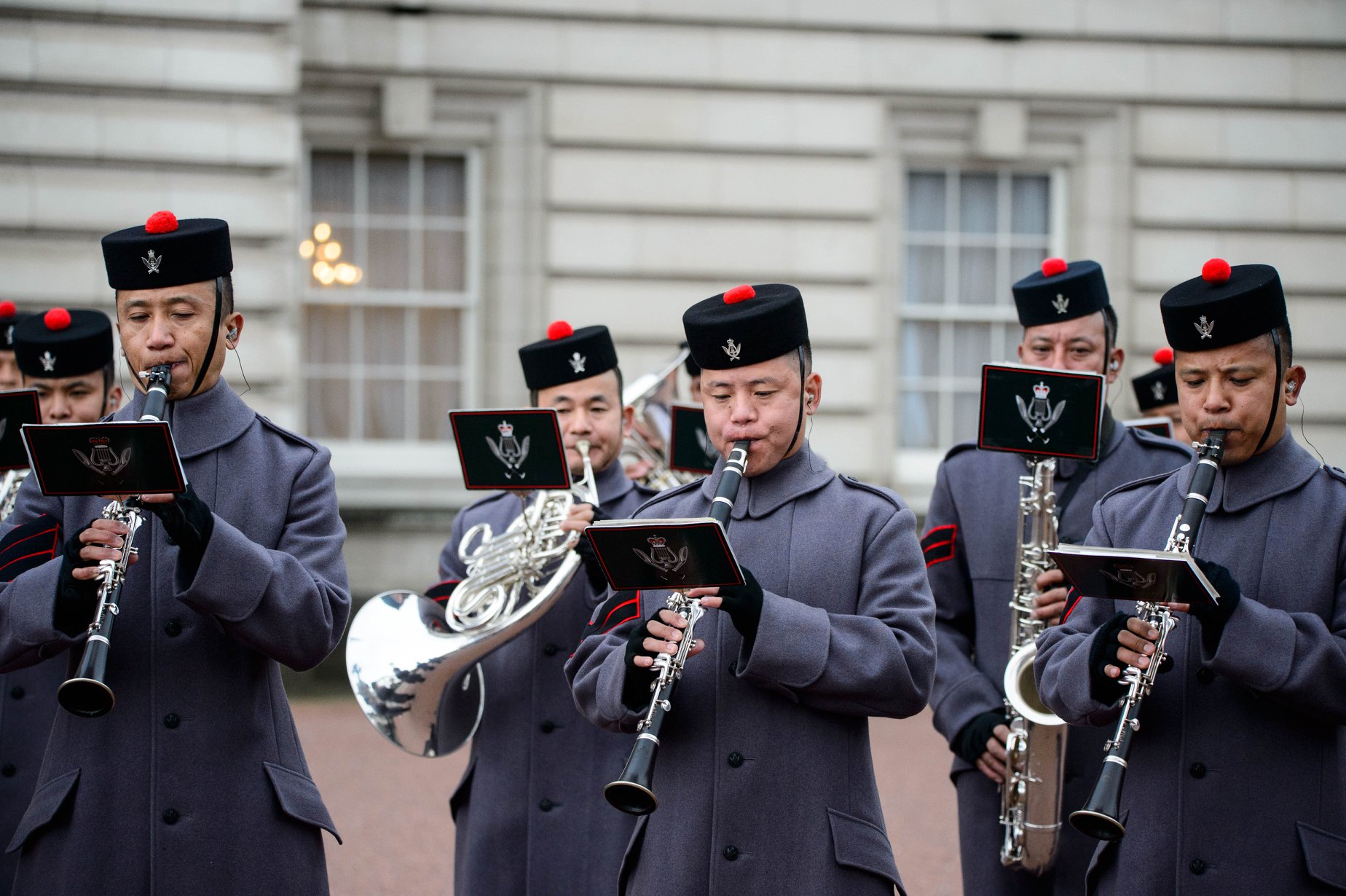 The Queen’s Gurkha Engineers will be providing the Queen’s Guard and Windsor Guard from 18th February to 12th April 2019.