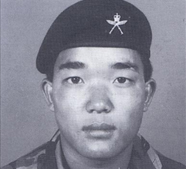 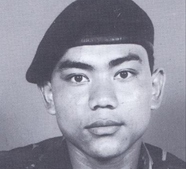 On the evening of Saturday 8 November 1997, three young soldiers from (Assault Engineer) C company 2 RGR were tragically killed in a road traffic accident in Brunei. The soldiers were returning to camp from a day out in Jerudong Park when their vehicle crashed on the Bandar to Seria highway.

The youngest of 6 brothers and sisters, Nepaljyoti was born on 19 December 1977 at Dandagoan in Khotang. His elder brothers are serving in the Royal Nepalese Army and the Police.

He was born in Wypung Tehrathum on 22 July 1978, the youngest of four children during his short time with the company and despite his small stature, he showed a natural talent for sports and represented the company at football,
volleyball and basketball.

Duryodhan Tamang was born on 29 March 1975 in Hatisar, Basah Barkhedanda. His father served with 10 GR as did three of his elder brothers of whom two (including the Gurkha Major) are still serving with 2 RGR.
Duryodhan was married and leaves behind a wife and two small children.
All three soldiers joined the Army together in 1996 and attended basic training in Church Crookham. They joined the company in December 1996 and all three completed the Assault Engineer Basic Course in June 1997. Nepaljyoti and Poshanraj were buried with full military honours at the Gurkha Cemetery in Kuala Belait on Friday 21 November 1997.
Duryodhan was cremated with full military honours at the Hindu crematorium at Anduki on the same day. The firing party, escort and pall bearers came form their many friends in the company.
To lose three soldiers so young and at the start of their military careers has been a harsh blow to the Company and the Battalion. We extend our deepest sympathy to their families and friends.

FOLLOW US
The Kasam Khane Parade for those Gurkhas joining T

Photograph taken in Brunei, home currently to The