In the Second World War there were no fewer than 40 Gurkha Battalions in British Service, as well as parachute, garrison and training units. In all this total sum amounted to 112,000 men. Side by side with British and Commonwealth troops Gurkhas fought in Syria, the Western Desert, Italy and Greece, from North Malaya to Singapore and from the Siamese Border back through Burma to Imphal and then forward to Rangoon. In addition to the enormous manpower made available there were many personal gestures on the part of the Minister and Court of Nepal. Large sums of money for the purchase of weapons and equipment, including many for the provision of fighter aircraft during the Baffle of Britain, were presented as gifts from Nepal. Considerable sums of money were also donated to the Lord Mayor of London during the Blitz for the relief of victims in the Dockland area. 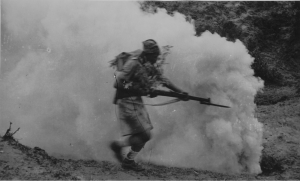 An equally generous response was made to a variety of appeals for aid – all this from a country which was then, and still is by western standards, desperately poor. The spirit of this friendship can best be illustrated by the reply made to the Prime Minister of Nepal to the British Minister in Kathmandu after the fall of France in 1940. When Britain stood alone. Permission was sought to recruit an additional twenty battalions for the Gurkha Brigade and for Gurkha troops to be allowed to serve in any part of the world. This was readily granted by the Prime Minister who remarked, “Does a friend desert a friend in time of need? If you win, we win with you. If you lose we lose with you”. The whole of the Nepalese Army was again placed at the disposal of the British Crown. Bight Nepalese Regiments were sent to India for internal security duties and for operations on the North-West Frontier. Later a Nepalese Brigade was sent to Burma and fought with particular distinction at the Battle of Imphal. 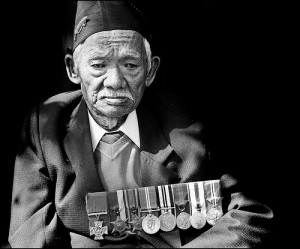 In the two World Wars the Gurkha Brigade suffered 43,000 casualties, and to date it has won 26 Victoria Crosses – 13 by Gurkhas and 13 by British Officers. This short chronicle is of necessity brief and factual. It cannot adequately portray the spirit and the character of the Gurkha soldier, nor can it reflect the ‘esprit de corps’ and the bond of comradeship and mutual respect which bind together the British and Gurkha Officers and men of the Brigade. But perhaps these words written by the late Sir Ralph Turner MC (Professor of Sanskrit at the University of London, Fellow of Christ’s College Cambridge and sometime Adjutant of the 2nd Battalion, 3rd Queen Alexandra’s Own Gurkha Rifles) in 1931, give a hint of the true feelings of both sides:

“As I write these words, my thoughts return to you who were my comrades the stubborn and indomitable peasants of Nepal. Once more I hear the laughter with which you greeted every hardship. Once morel see you in your bivouacs or about your camp fires, on forced marches or in the trenches, now shivering with wet and cold, now scorched by a pitiless and burning sun. Uncomplaining you endure hunger and thirst and wounds; and at the last your unwavering lines disappear into the smoke and wrath of battle. Bravest of the brave, most generous of generous, never had a country more faithful friends than you”.

The authoritative book on the history of the Brigade of Gurkhas “Britain’s Gurkhas” by Christopher Bullock can be obtained from the Gurkha Museum Shop.