Trailwalker originated in Hong Kong in 1981 as a military exercise organised by the Queen’s Gurkha Signals (QGS). Developed to test the endurance of the Gurkha Signallers, the exercise required both team work and physical ability.

The event was run over 100km of the Maclehose Trail, named after a former Governor of Hong Kong. Indeed to this day the walking man logo is still found along the Trail and is famous for being the iconic symbol of Trailwalker Worldwide.

In 1986 Oxfam Hong Kong became involved and alongside the Gurkha Welfare Trust, grew the event into a world renowned team endurance challenge which now takes place in more than 12 countries across the world, raising millions of pounds every year for both charities.

In 1996 the Queen’s Gurkha Signals returned to the UK, and the first UK Trailwalker took place in 1998. In the UK Trailwalker covers 100km over the South Downs, starting at Queen Elizabeth Country Park and ending at Brighton Racecourse.

This year this ultimate in physical and mental endurance event took place over the weekend of 29th/30th July. 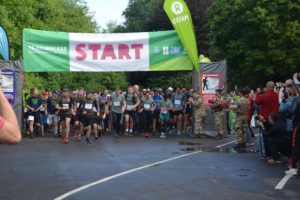 Superbly organised as usual by Queen’s Gurkha Signals, this year’s event began on Friday as teams arrived to register for the event and fuel up for the race with a traditional Gurkha bhat (curry) cooked by Gurkha Chefs which they were able to enjoy whilst watching a polished Pipes & Drums Display from Queen’s Gurkha Signals.

Saturday morning saw over 1560 runners in 399 teams line up on a slightly damp start line in 4 waves (between 0600 and 0900), with the first group being officially set off by Brigadier J J Cole OBE, Regimental Colonel Queen’s Gurkha Signals.

The weather deteriorated throughout the day, however huge congratulations must go to 1 RGR who competed the challenge in under 11 hours, becoming Trailwalker Winners once again.

They were followed in quick succession by teams from 30 Signal Regiment, 36 Engineer Regiment and Queen’s Gurkha Signals. In all more half of the top twenty teams to finish were Brigade of Gurkha teams.