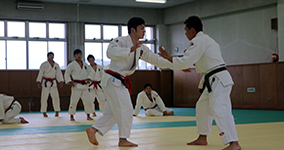 13 players and 3 coaches from the Army, Royal Navy and Royal Airforce were selected to represent the UK Armed Forces Judo Association (UKAFJA) on tour in Japan from 12th – 27th Nov 2016. This included several members of the Brigade of Gurkhas.

The team was escorted and supported by the OIC, Major Dave Campey, assisted by Squadron Leader Samantha Smithson. The primary aim of this tour was to further develop UKAF Judo players by exposing them to intense Judo training with world class players. This was in preparation for the 2016 Great Britain judo trials and to improve their performance throughout the 2017 international season.

Throughout the tour we were accommodated in Tsukuba University Training Lodge. The inexpensive hostel style accommodation was in close proximity to the training dojo and gym facilities which was extremely useful. The accommodation was comfortable – although curfew hours and designated shower time was a bit of a shock to some players! Training was comprised of strength and conditioning programmes or 90-minute technical sessions in the morning, followed by 3 hour evening randori sessions with the University Judo Club and its many international visitors. The bulk of the randori consisted of 12-15 x 5-minute bouts with 30 seconds’ rest in between. The level and the intensity of the training was very high with numerous world class judo players from Japan, Russia, Australia and Hungary on the mat at Tsukuba University.

On top of Judo training they attended a cultural visit to the birthplace of Judo, the awe-inspiring Kodokan Dojo, where Judo was created in 1882 by its founder Pro Jigaro Kano. This was followed by sightseeing in Tokyo and a team meal on the Saturday. They also visited Mount Fiji Q Highlands Theme Park at the base of Mount Fuji as part of an R&R package at the end of tour.

Judo originated in Japan; as a judoka it is everyone’s dream to go to the sport’s home to train. The UK Armed Forces Judo Tour to Japan provided its elite Judo squad members a fantastic opportunity to improve their Judo and prepare themselves for the upcoming national and international competitions.