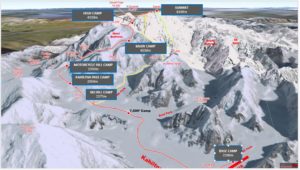 The team have arrived safely in Anchorage after their flight in. Anchorage is the largest city Alaska and home to half of the state’s 750,000 strong population. The team are taking a day here to buy some final supplies and sort out their last bits of kit prior to deployment.
We then move 120km North to Talkeetna, a tiny town on the outskirts of the Denali National Park and Preserve. Once we’ve received our registration brief from the rangers of the National Park Service, we’ll weigh our kit in and prepare for the flight out the following morning.
For the insertion itself the expedition has chartered two ski-equipped light aircraft to carry us on to Base Camp on the SE Fork of the Kahiltna Glacier, where we begin our climb. We will then spend a day rehearsing the mountain skills we learned over the previous four months, ready for the challenge ahead.
The first few days will see the team traverse the glacier to reach the base of the Western Buttress and from there we will begin the ascent. The fastest the expedition can take is 14 days, allowing for acclimatization to the altitude as we move up the mountain.
Read the overview of the Exercise