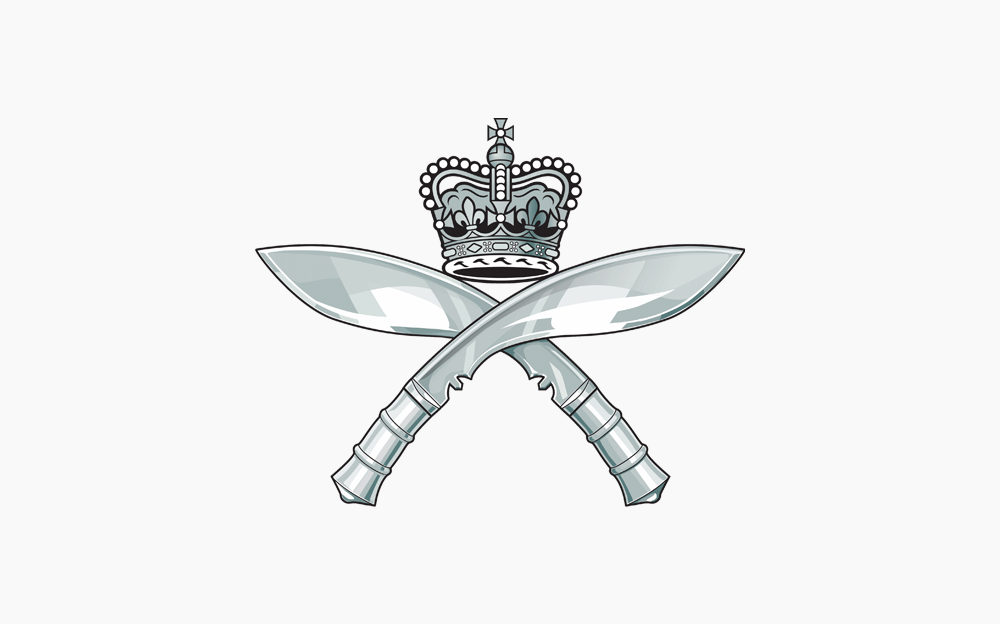 The Royal Gurkha Rifles (RGR) is an infantry regiment of the British Army.

It is manned by Nepali soldiers, and officers from Nepal and Britain, and it is this blend of cultures that makes the RGR unique. The Regiment consists of They currently consist of two battalions, one based in Brunei and one in Shorncliffe, UK. There are two companies, F (Falklands) and G (Coriano) with 2 and 4 RANGER Battalions respectively, who are based in Aldershot.

They served the British Crown with distinction for over 200 years and are regarded as some of the best soldiers in the world.

The Royal Gurkha Rifles is manned by Nepali soldiers & officers; and British officers, it is this blend of cultures that makes the RGR unique. Gurkhas are known for their professionalism, fighting prowess, humour and humility.

Following the Anglo-Nepali war and the treaty of Segauli in 1816, Gurkhas were first recruited into the British East Indian Company. What has followed is over 200 years of distinguished service to the Crown.

They distinguished themselves during the Indian Mutiny of 1857, staying steadfastly loyal while helping to put the insurrection down. Throughout the 19th and early 20th Centuries they fought in India’s near abroad. Over 200,000 Gurkhas volunteered to serve with the British-Indian Army in the World Wars.

Following the Government’s Options for Change in 1994, the four regiments of Gurkha Rifles were amalgamated to form a single regiment, The Royal Gurkha Rifles. Following this were UN and NATO operations in the Balkans, East Timor, Sierra Leone, Iraq and Afghanistan.

Today the RGR consists of three Battalions. Two Light Role Infantry Battalions (1 and 2 RGR) which alternate between Brunei and the UK every three years. The Brunei-based battalion specialises in Jungle Warfare and the UK-based battalion is part of 16 Air Assault Brigade. There are two companies, F (Falklands) and G (Coriano) with 2 and 4 RANGER Battalions respectively, who are based in Aldershot.

Gurkhas have been in Brunei, since 1962, when they were deployed from Singapore to quell a revolt against Sultan Omar Ali Saifuddien III in December of that year. After the Brunei revolt, at the invitation of His Majesty the Sultan, there has always been a Gurkha Battalion in Brunei.

The Battalion forms the bulk of the British Forces Brunei Garrison and specialises in jungle warfare. It rotates with the UK-based Battalion every 3 or 4 years. Every year, part of the battalion deploys on overseas exercises to Australasia.

Since 2015 the RGR has had a Battalion in 16 Air Assault Brigade as part of the Army’s rapid response airborne formation.

The Gurkhas have a long airborne tradition; from the early operations of 153 and 154 (Gurkha) Parachute Brigades in WW2, to the Gurkha Independent Parachute Company in 1963, their part in the 5 Airborne Brigade in the 80s and 90s and their role within today’s 16 Air Assault Brigade. The Battalion is based in Folkestone, Kent and can be deployed anywhere in the world on short notice.

F (Falklands) Company is now part of the British Army Special Operations Brigade and operates with The Second Battalion, The Princess of Wales’s Royal Regiment.

G (Coriano) Company is now part of the British Army Special Operations Brigade and operates with The Forth Battalion, The Princess of Wales’s Royal Regiment. 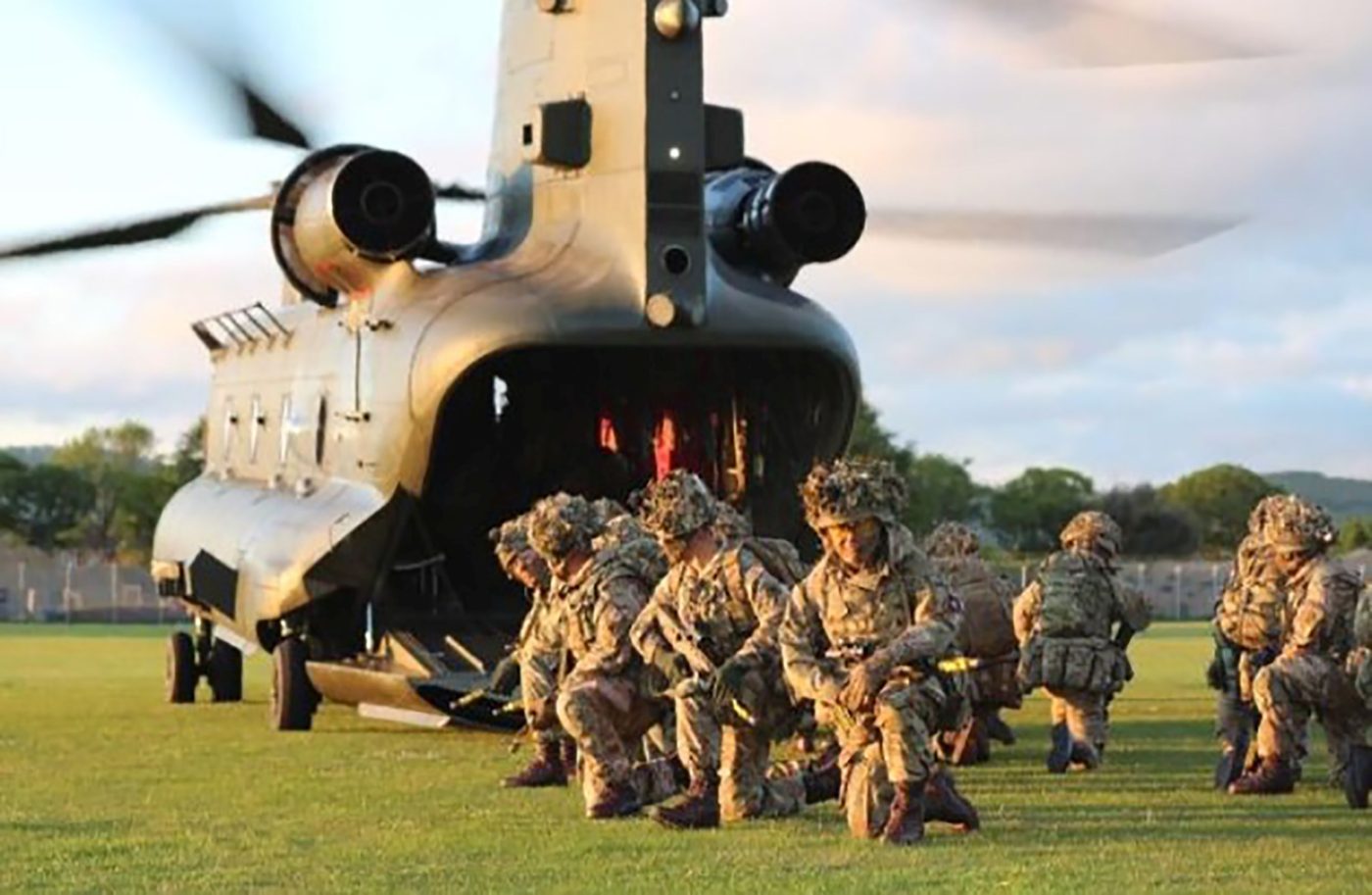 During the Indian Mutiny in 1857-8 the Sirmoor Battalion (which later became the 2nd KEO Goorkhas, and latterly the Royal Gurkha Rifles) remained loyal to the British Crown. The Battalion, together with the Guides and the 60th Rifles, held the key position on the outskirts of Delhi known as Hindu Rao’s House for over three months of constant attack. During this period the 2nd Goorkhas suffered 327 casualties (including 8 of their 9 British Officers) out of a total strength of 490.

Following the conclusion of the mutiny, the 2nd Goorkhas were designated as a Rifle Regiment as a mark of the bond that had been created with the 60th Rifles. This explains the dark green uniforms, the rapid marching pace, and the title of Rifleman given to Gurkha soldiers.

In addition, Queen Victoria directed that the Battalion be awarded a special truncheon to replace the Regimental Colours that could no longer be carried by a Rifle Regiment. The ornate Queen’sTruncheon (ceremonial staff), which is the Gurkha Riflesequivalent of a Regimental Colour (battle flag) was given to the 2nd Gurkha Rifles (The Sirmoor RIfles)by order of Queen Victoria in 1863 during a viewing of the truncheon in the Bow Room at Buckingham Palace in London.

The Queen’s Truncheon is still in service today, proudly guarded by the Royal Gurkha Rifles. There is an inscribed band around the staff of the truncheon to commemorate each occasion that it has subsequently been presented to the sovereign.

British Officers are recruited into The Royal Gurkha Rifles from across the UK and Commonwealth. All officers are expected to speak Nepali and will attend the 3-month language course in Nepal after selection. If you wish to become a Royal Gurkha Rifles Officer please contact the Army Careers Adviser (ACA) who covers your school or university.

Alternatively, apply online via the Army Jobs website. Recruiting Group will then confirm your qualifications and put you in touch with the relevant ACA. Furthermore, anyone who wishes to know more about joining The Royal Gurkha Rifles as an officer should contact the Regimental Secretary, Major (Retired) Bruce McKay.

Contact us to find out about becoming an RGR Officer 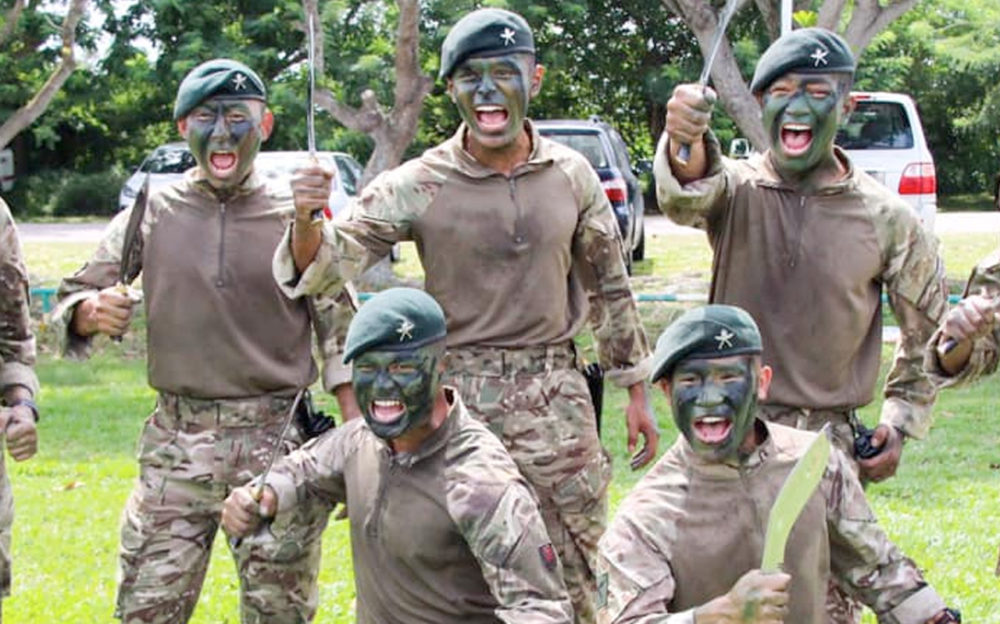