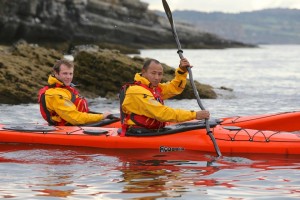 From May to August 2015 two soldiers from the Royal Gurkha Rifles will ski and kayak 1500 miles around Ellesmere Island in the Canadian Arctic Circle.

Captain Jon Armstrong and Corporal Arjun Limbu will undertake the epic voyage around the tenth largest island in the world and the challenge is expected to take roughly 100 days to complete. During this time the team will face arduous conditions which will see them battling against unpredictable ice, climate, weather and vast distances – not to mention polar bears and the problems of consuming enough calories to fuel their tremendous efforts. The aims of the expedition are as follows:

1. Complete the circumnavigation of Ellesmere Island in under the world record time of 104 days

2. Mark the 200th anniversary of Gurkha service to the Crown and publicise the Brigade of Gurkhas

3. Raise money for the Gurkha Welfare Trust who care for Gurkha veterans, their families and communities

Jon and Arjun are raising money for a water project in Nangkholyang village, Taplejung, Nepal – Arjun’s home district. The project will provide 63 households and a primary school with direct access to clean running water, transforming the lives of the villagers who rely on subsistence farming for their livelihoods.

If you would like to contribute to Jon and Arjun’s efforts then please visit the Arctic Gurkha Just Giving page. or to read more about Expedition Arctic Gurkha visit their website : http://www.arcticgurkha.com/